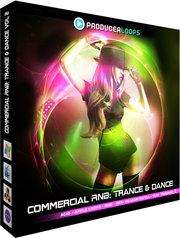 Commercial RnB: Trance & Dance Vol 2′ continues this hit making series from Producer Loops, bringing you 5 construction kits inspired by the hottest crossover styles in the charts today. With both commercial and underground appeal, as well as a professional feature set, this is a must-have sample library for any wanna-be pop icon.

Commercial RnB: Trance & Dance Vol 2 is available as an instant download for £24.95 GBP.