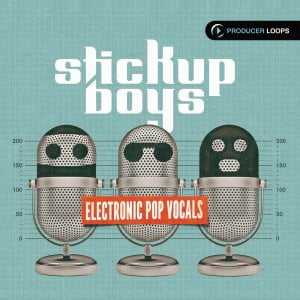 This library comes jam-packed full of live guitar loops, analogue Indie Pop synths, grooving basslines and snappy drums, all centered around complete vocal performances, making this product a perfect starting point for your next track, as well as an abundant source of material to chop, slice and edit.

The Stick Up Boys’ off kilter approach to Electronic Pop music is orchestrated by a trio going by the names of “Front”, “Brains” and “The Driver” in Brighton, UK. They were originally formed after Front decided the world owed him something and that it was time to take it.

Borrowing influences from modern Dance and Electonica as well as the most notorious of the 80’s and 90’s Pop scene, the Stick Up Boys have been heralded as the “new sound of Urban Pop music”.