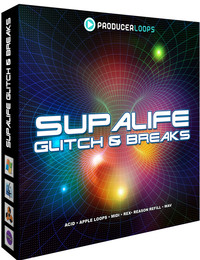 Producer Loops has announced the release of Supalife Glitch & Breaks, a new sample pack by Eddy Beneteau of Supalife Records.

It includes some of the most insane turntable wizardry around plus everything from vocal fragments to synth leads and white noise, all scratched beyond recognition into new rhythmic phrases.

These scratch loops alone would be enough to create a worthy sample pack, but ‘Supalife Glitch & Breaks’ also includes a selection of infectious beats, bass lines, melodies and chord progressions, as heard in the MP3 demo.

And because every loop has been formatted as REX you can play them like instruments and easily re-arrange the scratch loops into new patterns using any compatible software (such as Stylus RMX or Dr OctoRex in Reason 6.5).

Supalife Glitch & Breaks is available to purchase for £22.46 GBP.