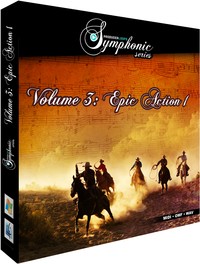 ‘Symphonic Series Vol 3: Epic Action 1’ delivers the massive, epic sounds of action movie soundtracks from both modern days and the Hollywood Golden Era over five breath-takingly original compositions and a HUGE 4.9 GB of content! It was composed and produced by Sergei Stern, an up-and-coming composer with extraordinary talent and vision. Audio and MIDI loops are included alongside full arrangements for your sequencer, in OMF format.

All of the amazing live instruments found in a symphony orchestra are included in this epic pack, alongside percussions. All loops and phrases feature “solo” performances for maximum authenticity.