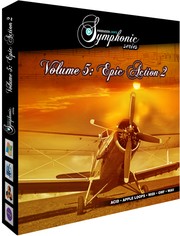 ‘Symphonic Series Vol 5: Epic Action 2’ follows on from its hugely successful predecessor with five more breath-taking, original compositions totalling a staggering 5.4GB of uncompressed data. Composed and producer by Sergei Stern, an up-and-coming composer with extraordinary talent and vision. Audio and MIDI loops are included as well as full arrangements for your sequencer in ACID/WAV, Apple Loops, and OMF formats.

All of the amazing live instruments found in a symphony orchestra are included in this epic pack, alongside percussions. All loops and phrases feature “solo” performances for maximum authenticity.