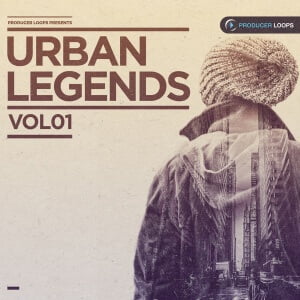 ‘Urban Legends Vol 1’ from Producer Loops fuses elements of EDM, Pop, RnB, Trap and Hip Hop to bring you five highly polished Construction Kits with an authentic Urban undertone. A full range of instrumention is included, from subtle pianos and sparse vocal fragments, to huge 808 basses, Trap-style hats/snares and breathtaking EDM leads and melodies. The loops in this pack have applications far outside of strictly Urban music, and can be re-combined in a near-limitless number of ways.

Presented as full stems for quick and easy integration into your projects, every loop, sample and hit in this product is presented to you in the highest quality, with one-shots and MIDI files included for producers who need extra control. Several song sections are included with each kit, as well as one-shots for creating sampler patches and MIDI files for substituting your own synths for the pre-rendered ones.

Unlike most conventional Construction Kits, each song section is presented to you as “stems”, meaning the entire duration of each element has been rendered. There’s no need to reference the demo files and drag samples into the right place. Simply drag-and-drop to the first beat of your bar and everything syncs up perfectly.