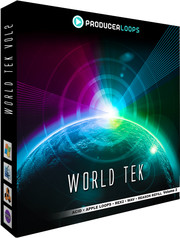 Producer Loops has announced the release of World Tek Vol 2, a sample library by Jeff Rhodes and Todd Milne.

‘World Tek Vol 2’ was produced by sound designer Jeff Rhodes, and multi-instrumentalist, Todd Milne. It’s jam-packed with 600+ loops and samples. Stand-out features include the 189 flute and wind instrument loops, along with acoustic drum loops and other instrument loops. Tempos range from 61 to 154 BPM.

After one year of ultra hard work, we are very proud to unveil ‘World Tek Vol 2’, the sequel to our best-selling world music sample pack! ‘World Tek Vol 2’ can be used to create Ambient, World, Hip Hop, Trip Hop, Lounge, Drum and Bass, Industrial, Techno, Dubstep, Soundtracks, and many other commercial and underground styles.