Producer Pack has announced the release of Back to 95 – Volume 3, a sample library by legendary UK House & EDM producer Jeremy Sylvester. 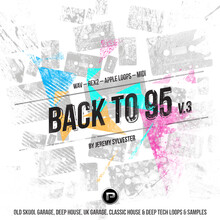 If you are familiar with Jeremy’s work over the past decade on top EDM international dance labels such a Defected, Nice n Ripe, Strictly Rhythm, Azuli, Urban Dubz Music and many others, you’ll know what to expect from this fantastic new sample pack.

The sample pack is available to purchase for £17.95 GPB.