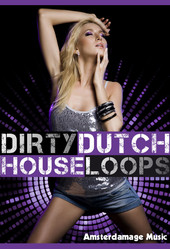 Dutch House Often referred to as “Dirty Dutch” is the more harder of the electro house sound currently very popular in the clubs all over the world. The style originally out of the Netherlands and championed by pioneering producers and DJs such as Laidback Luke and Afrojack.

This exclusive pack contains awesome tried and tested hard edge Afro/Latin House loops designed to give maximum impact on the dance floors. Also included are various one shots, effects and synth lead sounds to get your body pulsating.

The pack comes in multiformats which include 24 Bit Wav, Apple/Aiff, MIDI and Rex2 files compatible with most popular software instruments such as Reason, Ableton, Logic, FL Studio, Halion, Pro Tools and much more.

Dirty Dutch House Loops is available to purchase for £12.95 GBP.