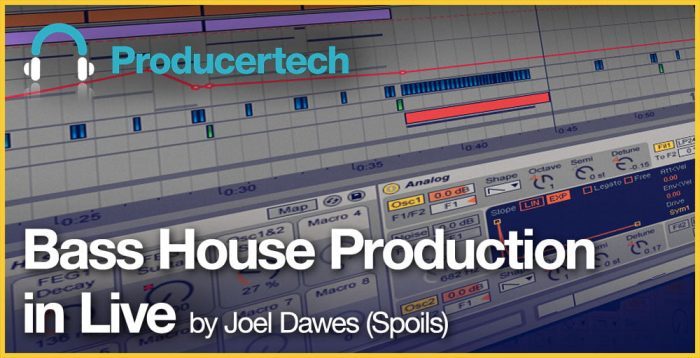 Bass House is one of the freshest new sounds in dance music, tearing up underground club nights and major festival stages alike. This new course from Producertech gives you the opportunity to see for yourself how a dark, heavy, bass house tune is constructed by one of the scene’s leading lights, producer Joel Dawes, renowned for his productions with both Drum and Bass group Klax, and with Deadbeat under the Spoils alias.

Known for their hard hitting, garage influenced take on the bass house sound, Spoils erupted onto the scene with their collaborations with producer Monkey Wrench, including the colossal ‘Enemies in the Dance’, released on thriving London based underground label Stripes Records. Spoils again displayed their production prowess on their thumping 2015 Temptation EP release, garnering support from a host of DJs including Hannah Wants, Zane Lowe, Gorgon City and even UK Garage and dance music legend DJ EZ. Alongside this, Spoils have DJed at venues such as London’s Fabric, and were even invited to play a set for dance music institution Boiler Room, one of the highest honours in the electronic music world.

With a string of well received productions, Joel Dawes is well suited to showing you the ins and outs of an up-front bass house track. He starts off the course by walking you through his drum sounds, both how he processes them and how he creates a rolling groove. Joel then proceeds to explain how he designs his sweeping pads, shimmering leads and signature dance floor destroying basslines, taking care to explain the sound design methods involved. Along the way, Joel also shares a few of his processing techniques and talks you through his custom effect racks, before finishing off the course with a quick section on mastering.

The course is available for purchase for £19.95 GBP.