What do Megadeth, Jay-Z, Alice Cooper, Gladys Knight, NOFX, Lagwagon, No Use For a Name, Patty La Belle, Tower of Power have in common with Rock Band and Guitar Hero? Legendary punk rock producer and mixer Ryan Greene. And now anyone can be on that list, with three new drum ReFills featuring Ryan Greene’s signature sound. Propellerhead today released the latest installments in its ReFill Creator Series: Ryan Greene Alt Drums. 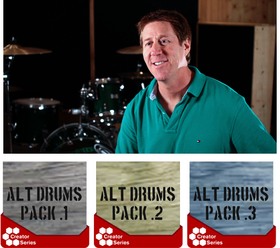 Ryan Greene Alt Drums comes as three separate volumes, each containing three drum kits with several microphone setups and alternate snares. Each of the three ReFills comes with preset patches for Reason’s Combinator device, with three different microphone setups: close mics, no ambience mics, and all mics; Producer Combinator patches with dry, overhead, and room microphone setups; Individual Kit Pieces for the NN-XT sampler; effects patches; as well as 100+ drum track MIDI files created by Ryan Greene. The sounds are fully produced; finished drum kits with kick drums with big bottom and snare drums with punch. Thanks to the premade patches using different microphone setups and production techniques, no additional mixing is required from users to get a great sound that sits right in the mix.

“All the sounds have been tested in real applications throughout the recording process to make sure they hold up under heavy fire, which basically means up against huge guitar and bass sounds,” says Ryan Greene.

Ryan Greene Alt Drums Volume I, II and III are available to purchase for $99 USD / 89 EUR (including VAT) each.

Just Got the refills from ryan greeen.. alt drums 1 and 3 in 2020 on sale for 49each.. they sound good and though usable .. I think they lack a bit in being a bit dull .. if I compare it with the Steven slate drums free 5.5 .. there’s more clarity there … I’m thinking of getting the blackbird studio drums pack which is on sale right now .. and comes highly recommended .. and maybe later go in for bfd3 or the full SSD ..