Propellerhead Software has launched Thor for iPad, a synthesizer app based on the flagship synthesizer in Reason.

Designed for mobile music making, it features a responsive interface optimized for hands on control, an innovative keyboard and the same massive synthesis engine as its desktop cousin. It’s the same semi-modular synth with the same set of selectable oscillator and filter types and the same advanced routing of audio and modulation.

Aside from a regular piano style keyboard, Thor features a keyboard that can be locked to specific keys and scales, making it impossible to hit a wrong note. This is particularly useful on a mobile device when playing directly on the screen. More than just helping the player to stay in key, this musically aware keyboard is a source of endless inspiration and experimentation.

Thor is a synth enthusiasts best friend, with six oscillator types and four filter types to choose from and virtually endless ways of routing and manipulating audio and modulation, this is a very powerful synth to bring on the road. It’s an ultra portable instrument for playing or a synth workshop for just having fun. Aside from the built-in keyboard, Thor can also be played via MIDI from an external keyboard or sequencer. With support for Audiobus, Thor’s audio can mixed in other music making apps on the same iPad.

A Thor patch created on the iPad can be transferred to a computer for use in Reason. Instead of starting from scratch, a user can quickly load a patch from the built-in sound bank. Thor comes with more than 1000 expertly crafted patches from artists and sound designers such as Richard Devine, Vengeance, Kill the Noise and many more. 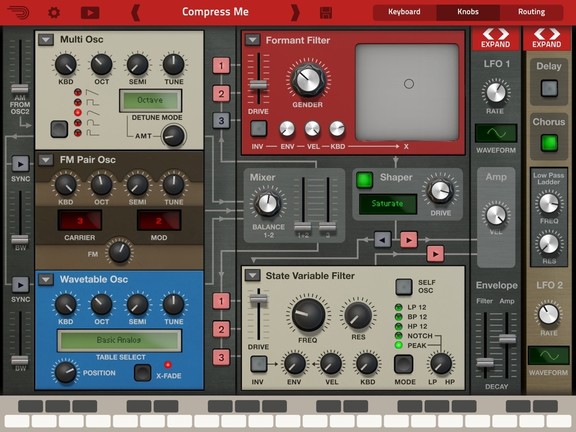 On the iPad, Thor comes with a specially designed interface that’s optimized for touch control and the iPad screen.