Plugin Boutique is offering a discount of over 50% off on PSP E27, the multistage equalizer plugin by PSP Audioware. 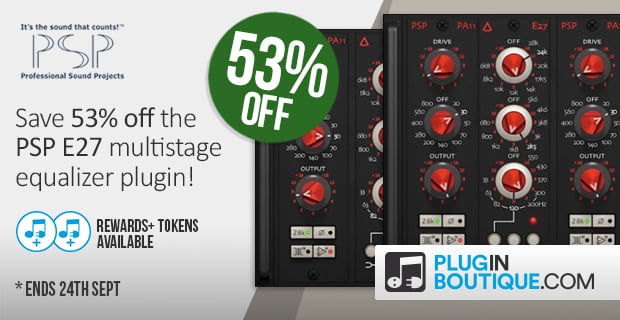 PSP E27 SE (included in the bundle) is a simplified version of PSP E27, our multistage equalizer plug-in modeled after the analog E27 produced by Avedis Audio Electronics. The PSP E27se is based on the same great audio engine, but it has a redesigned, simpler GUI making quick adjustments a snap. The PSP E27se is equipped with one E27 and one PA11 module. It’s perfect for both mono tracks and stereo stereo in which you don’t need seperate settings for the Left and Right channels.

PSP E27 for Windows and Mac (VST/VST3/AU/RTAS/AAX) is on sale from Plugin Boutique for just £56 GBP until September 25th.