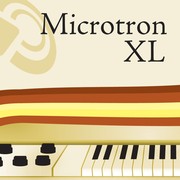 All of the original performance nuances of the Mellotron M400 have been immaculately captured through a Neumann U47 Microphone and Reeves Custom 50 Amplifier.

Microtron XL integrates seamlessly into Ableton Live 8, Kontakt 3/4 and Logic 8/9. It comes packed with a palette of 9 expertly recorded instruments and over 1 Gigabyte of multisample content.

Microtron XL for Kontakt includes all 9 multisampled instruments complete with effects and a custom KSP user interface. Logic and Kontakt versions both come with a collection of over 150 professionally performed Apple Loops in SIAL format.

Microtron XL includes the following instruments as programmed from the original tapes.

Microtron XL is available to purchase for $29 USD