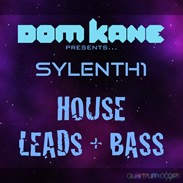 Quantum Loops are proud to present the first in a series of Artist preset packs from none other than label head honcho himself, Dom Kane.

Dom Kane is a Producer and Sound Designer that needs very little introduction, having created sounds for global names such as Moog, FXpansion, Deadmau5 & Steve Duda, and many more. As a producer, his tracks have appeared in the playlists of DJ’s such as Pete Tong, David Guetta, James Zabiela, Andi Durrant, Deadmau5, and many more. As a DJ, he’s been a resident at some of the worlds most legendary clubs including Space Ibiza and Ministry Of Sound in London.

The sound library is available to purchase for £14.95 GBP.