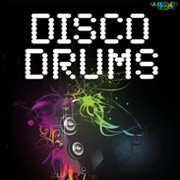 Over 1.3GB of genuine acoustic drum recordings, using analogue and valve processing at Acapela Studio in Cardiff, this pack contains 45 original drum patterns, and 45 associated variations with fills, and these are available as either the final mixed and mastered loops, or each individual separate stem to create your own Disco Drums!

We’ve even thrown in a bag full of single drum shots, so that you can start creating your own patterns with the sequencer of your choice.

Each loop has been carefully created using various recording techniques, and then processed, multilayered, phase aligned, quantised, and gated, before being passed through two analogue valve/tubes for that extra warm vintage sub with bright tops.

So if you’re looking for genuine disco patterns, played by a genuine drummer on a genuine drum kit with genuine vintage recording gear, then genuinely look no further! ;)

Disco Drums is available from Loopmasters for £19.95 GBP.