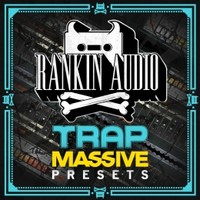 Rankin Audio has released Trap Massive Presets, a collection of trap sounds for the Massive software synthesizer by Native Instruments.

If you’ve not heard of Trap you must have been living under a rock or maybe in the cupboard of an ageing techno producer. Either way, Trap is here and making some serious moves.

Contained in the pack is a collection of everything you need to master the synth elements of the genre and style out a Trap monster of your very own. All the pitch- bent, bubbly goodness you can eat, harnessing the power of the one and only Massive. Just run some earth moving 808s underneath and you’re in business.

All presets specially crafted by the mysterious team of lunatics at Rankin Audio HQ and ready to be dropped straight into the DAW without any further processing. Thats not to say you can’t chain the living daylights out of them with effects for extra chuckles but thats down your your own dark and twisted imagination.