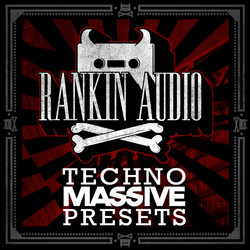 Rankin Audio has introduced Techno Massive Presets, a collection of patches for the Massive software synthesizer by Native Instruments.

Rankin Audio Techno Massive Presets contains everything you need to build a quality techno track ready to melt some willing faces. Basslines ranging from clicky and bouncy to hard and thumping, atmospherics and white noise risers, soundscapes and pads, to the all important synths and stabs. Many different percussive and rhythmic elements are also included, with each sound able to be manipulated across a track through macro controls, giving you the movement necessary to keep techno listeners engaged.

Inspired by the sounds of the likes of the Drumcode artists such as Adam Beyer and Joseph Capriati, through to favourites such as Plastikman, Mike Humphries, Ben Simms, and the harder sounds of the Advent and Industrialyzer. As with all Rankin Audio packs the quality is of the absolute highest standard so cue that demo track and feel the techno warmth in your chest.

The Loop Loft launches Back To School Sale – 35% off