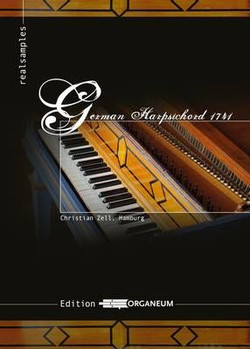 Realsamples has released the German Harpsichord 1741, a harpsichord instrument library.

The German Harpsichord 1741 library offers an instrument by Christian Zell, built in Hamburg in 1741. It resides in the Organeum in Northern Germany. The harpsichord delivers a vivid midrange and shimmering treble response. The library contains 6 different sounds: Front and rear 8’ stop, both together, Lautenzug, 4’ stop as well as the tutti combination of both 8’ and the 4’ stop. The sample set consists of nearly 3,300 single samples. Every note was recorded up to eight times per stop, key release noises four times per note and stop.

For the recording of the harpsichord, custom-made Wagner™ U47w® tube microphones were employed, in conjunction with Crane Song™ Flamingo® preamps and Universal Audio™ 2192® converters. For best sound quality, the samples were recorded in 192 kHz/24 bits resolution. To start right away, presets are available for all common sample formats including HAlion®, Kontakt2® and higher, EXS24® and GigaStudio3®.