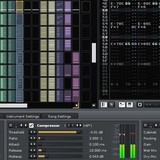 It’s official. We are pleased to announce that Renoise 2.6 is ready for production. Over three months of community driven beta testing has put the software through the ringer. User feedback has resulted in our most innovative release to date. Rock solid stable, as usual.

Renoise is available to purchase for Linux, Mac, and Windows, priced at 58 EUR excl. VAT.

The Loop Loft releases The Art of Brushes, Reason 5 ReFill