Atom Splitter Audio has developed a number of interesting VST plug-ins, including Distroyr and Pulsation Lite (both freeware).

A gate effect basically controls the volume of the audio. G8-R does this running by patterns in a 32-step sequencer.

Each step in the sequencer can be drawn manually to create the desired volume envelope. Simple? Yes!

G8-R has a few sequencer trigger modes: MIDI Key, GUI button and PC Key (useful for live performance I guess), Host and Freerun. Unfortunately, when stopping the transport in FL Studio, G8-R’s Host mode pauses rather than resetting its play position. This makes it run out of sync when restarting a pattern or playlist.

Is there more than gate? 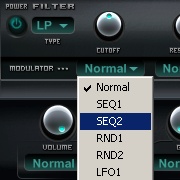 G8-R also has a built-in filter effect (12 modes) with cutoff, resonance and mix controls which can be modulated.

Modulation is also available for the main volume, gain, dry/wet, valve and pan controls. You even use these effects separately by bypassing the sequencer/gate altogether.

Another cool feature is the randomize buttons which let you randomize parameters to create settings you might not dial up yourself.

G8-R is a great effect plug-in if you’re looking for a flexible gate with some extras.

I know there are a few free gate effects around, but G8-R’s lovely filter and modulation system add great value. At $9.99 USD it’s not exactly an expensive plug-in either.