I reviewed the first version of Curve about two and half years ago, and most of what I wrote there goes for Curve 2, but recently I have been designing some more sounds with this synthesizer so I thought it was a good time for an additional version 2 review.

For those who haven’t heard of Curve before, it is basically a subtractive synth with some tricks up its sleeve.

Curve is a software synthesizer with an irresistible waveform editor, huge sound library and slick interface. Ideal for both experimentation and detailed tweaking at an excellent sound quality.

Feed Curve’s oscillators, LFOs and envelopes with custom waveforms. For anything rhythmic from wobbles to FX loops and evolving pads. For broad oscillator timbres from deep basses to shrill, aggressive snarls. 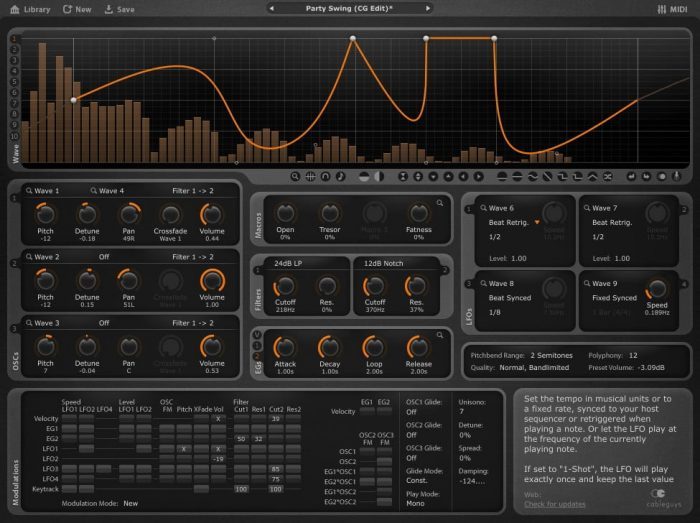 Curve 2 comes with a new layout, improved workflow, and a black skin.

I would say the main attraction of Curve lies in the drawable waveforms that can be used for the oscillators and LFOs. This allows for great control over partials/harmonics of the sounds and it welcomes experimentation which I reckon most sound designers will enjoy lots.

With version 2, you now can also use the same functionality with all three envelope (velocity + 2 custom) modules. This makes Curve an even more flexible synthesizer to work with, since you can now create/draw your own multi-stage envelopes right there in the main display.

Also new is the fact that you can combine two waveforms in a single oscillator, which likewise really opens up the way for new sonic exploration.

A workflow improvement comes in the shape of macro knobs, to which you can assign a number of parameters for modulation. 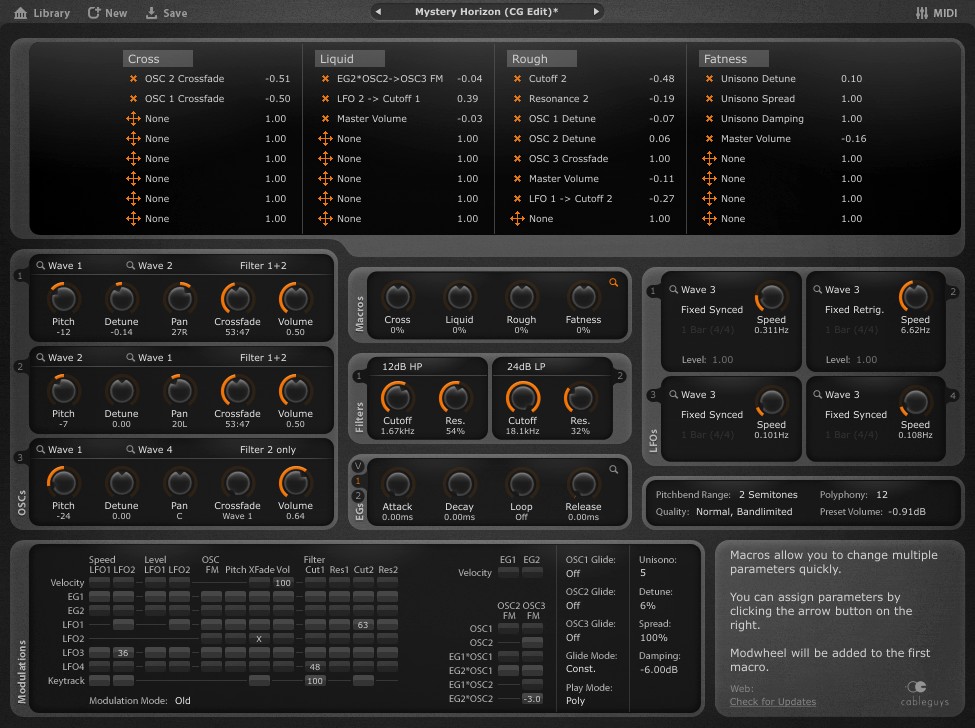 Of course you could automate this kind of thing without macros just fine, but it where’s the fun in doing that when you can create sonic mayhem with the turn of a single knob instead?

The 2 filter units are still there, and with version 2 you can now also route them individually to each oscillator, either single or both in series or parallel.

Curve 2 has a more refined, and more user friendly interface. I have to admit I wouldn’t mind seeing a white/grey edition though. The new dark skin looks great but it can be a bit straining on the eyes, to me anyway. That said, it is still a lovely GUI and the workflow is great.

Add to that the ever growing online presets database (well over 2,200 last I checked) which includes tons of high quality sounds, and you will find Curve 2 to be a versatile synthesizer that can easily stand its own ground.

Check out Myagi’s video on how to create a supersaw synth bass with Curve 2 for a good overview of how to design sounds on this plug-in.

Cableguys offered something new and exciting with Curve’s flexible drawable waveform based instrument, and they confidently lift the powerful synthesizer to a higher level with Curve 2.

The improved envelopes, extended oscillators, macro knobs and workflow adjustments all contribute to creating an instrument that motivate the sound designer in me.

The only thing missing is the effects section, and to be honest, I don’t really miss it at all. It is still refreshing to hear what you can achieve without reverb, delay, and whatnot, and if need be there are plenty of other tools to get that job done anyway. If nothing else, the lack of effect units makes me design my sounds more carefully. Browsing the many beautiful sounds in the presets database, I realize I still have a lot to learn.

So, whether you want to create your own unique sounds, or simply enjoy the thousands of presets provided by the community, Curve 2 is definitely a synth that deserves your attention.