FXpansion has recently released DCAM: Synth Squad, a bundle of plug-ins that is supposed to be the “missing link between analogue and digital synthesis”.

DCAM: Synth Squad has been built by accurately analysing and modelling real-world components and circuits found in vintage analogue synths. As a result, don’t expect a standard ‘clean VA’ sound from these synths – you would never get perfect waveshapes on a real VCO-based analogue synthesizer. What you can expect is a set of meticulously crafted synthesizer instruments that sound truly alive in a way that is very rare in the digital world.

So instead of trying to model the way analog synths sound, FXpansion took a good look at the actual individual components of various synths to create a realistic model of the circuit itself. The Roland SH-101, Oberheim Xpander, Alesis Andromeda, ARP Omni, Korg MS-20, various Moogs and Analog Systems modulars are some of synths of which the circuits were carefully studied for the development of the DCAM synths.

DCAM: Synth Squad is available for PC and Mac as VST and AudioUnit plug-ins. I installed them on a dual core (Intel) machine running Windows XP.

The installation procedure is a straightforward next, next, finish type thing. At the end of the installation you can optionally check for updates, which would be a smart thing to do if your machine has an internet connection.

The next step is to authorize the plug-ins, which you can do from the license manager, on the web, or via another computer if your workstation doesn’t have an internet connection.

Both the installation and authorization processes are well documented in the manual so you can’t really go wrong. The futuristic looking figures on the DCAM product page represent the three synthesizers in this bundle: Strobe, Amber and Cypher. The fourth plug-in is Fusor, a performance environment that can host any combination of the 3 DCAM synths.

While each of the synths is quite different from the other, they all share some common components. The preset system, the TransMod modulation system, and the on-screen keyboard with performance controllers are visible on the interfaces of Strobe, Amber and Cyper.

Let’s take a closer look at the instruments.

Note: There is a lot to write about these plug-ins. I will try to highlight some of the more interesting features of DCAM: Synth Squad without writing a book.

Inspired by monosynths like the Roland SH series, SCI Pro One, and Oberheim OB-1, Strobe aims to be a performance synthesizer for those classic analog synth sounds. 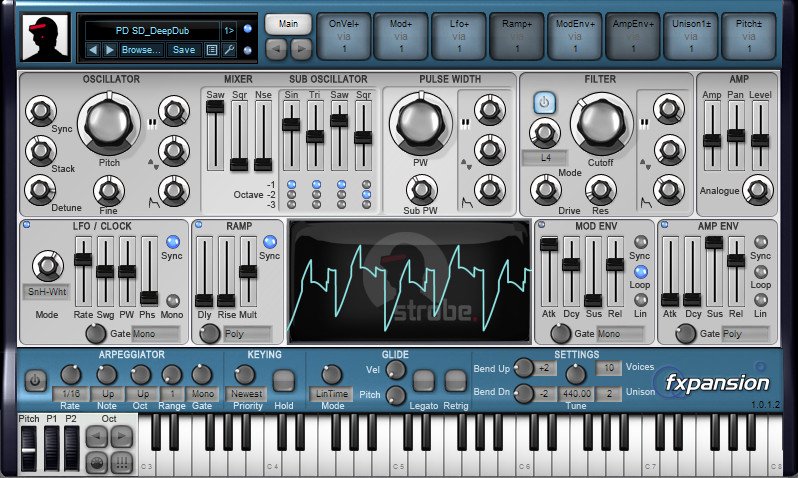 Though Strobe has just one oscillator, you can get a multi-osc sound by a technique called oscillator stacking. Add a few stacks and before you know it you have incredibly fat sounds, without the use of any additional unison voices. In the example below I added slowly add 2 stacks and slightly detune the osc to get a nice d&b type sound.

As you can see in the image above you can mix the main osc waveforms (saw, square and white noise) and there’s a sub osc (sine, triangle, saw & square) as well. Every waveform can be freely mixed and there’s a hard sync option which lets you add harmonics for complex timbres (it resyncs on each cycle of the lowest sub-osc, keeping the same pitch as the initial osc).

Note: The square waveform is actually a pulse so that’s why you will also find pulse width controls for both the osc and the sub-osc. 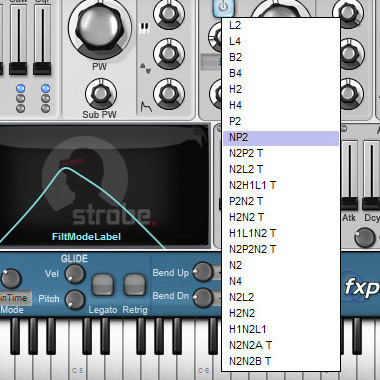 Strobe’s filter is based on an OTA (operation transconductance amplifier) cascaded core, with a diode clipper in the feedback section. The diodes are slightly mismatched, leading to the characteristic growl of a real analog filter.

And to get some nasty growl you can also use the drive knob to increase the gain of the signal going into the filter. Here’s an example of how the drive knob can change a sound, watch your speakers/ears!

The filter cutoff modulation depth can be set by three hardwired modulator controls: Keytracking, LFO, and Mod Envelope. Of course you can also use the TransMod system to modulate the controls in many other ways.

Next to the filter there’s a small amp section. Small but interesting!
The amp control lets you drive the sound so it gets distorted. There’s a waveshaping stage between the amp and the level. Turn up the level if you just want things louder, or turn up the amp for a nastier sound.

Another lovely feature is the Analogue control. This mimics analog synths by adding noise to the audio and control signal paths. I love these kind of “black boxes”. In the following sound clip I’m slowly turning up the analogue control to create a more noisy, yet lovely sound.

The next section includes a number of (gateable) modulators: an LFO, Ramp, Mod and Amp envelopes. The modulators have direct routings and depth controls for certain destinations. Of course you can also use these and many other modulation sources in the TransMod system.

In the bottom of the GUI you’ll find the arpeggiator, keying (for voice stealing priority and which held notes are played by the arp) and glide controls, and some general parameters for pitch bend ranges, tuning and voice/unison. Furthermore there’s a keyboard with octave up/down buttons, a pitchwheel, 2 perfomance wheels, a MIDI learn button and a Panic button.

If the sounds of the ARP and Solina string ensemble synths of the 70’s are your thing, Amber might be right up your alley. 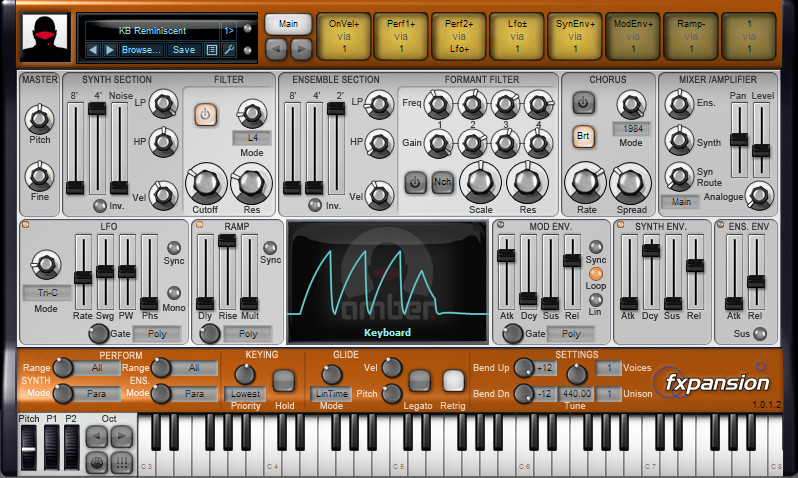 Amber, sounds of the divide-down string ensemble synths from the 70’s

Ever heard of divide-down synthesis? This is a technique in which the frequencies of the master oscillators are divided down to lower frequencies to increase the number of notes available.

Amber’s sound is derived from a bank of oscillators that are frequency-divided to produce a full keyboard range of 96 notes within a single synth voice – this means that you can play 96 notes simultaneously. These notes, referred to as ‘paraphonic notes’, are then mixed down into a single signal to be fed through conventional polyphonic processing blocks (a single instance within each synth voice).

So basically, what this means is that you can put both your arms across your keyboard, press down, and get every key of your controller to play at the same time, all just using 1 synth voice.

Amber has two paraphonic sections within a single synth voice, the synth and ensemble sections. Both look quite similar with sliders for 8’, 4’ (and 2’ for the ensemble section) octaves and 1-pole filter stages (LP/HP filters).

Very nice eh? You can really get some great variety with this filter.

I don’t know if you noticed but Strobe does not have any effects, neither does Cypher. Amber on the other hand has a chorus effect, like many real string ensemble synths. The divide-down architecture is not the best architecture for getting big fat sounds, so the chorus will help thicken things up a bit.

Amber’s chorus is modelled on some classic bucket-brigade delay (BBD) chorus circuits. Three different models are available, 1975, 1981 and 1984, each one sounding brighter as the years progress.

In the next clip you will first hear a dry string sound followed by the same sound with the chorus active.

Amber features a lot of the same things as Strobe like the gateable modulators, TransMod system, keyboard section, glide, key etc. It does not have an arpeggiator, which makes sense for a string machine. Instead there are some options for splitting the keyboard ranges of the synth and ensemble sections, and some performance modes can be selected: paraphonic, monophonic attack and release (single VCA paraphonic playing response) and monophonic note (1 voice = 1 note for both sections).

Whereas Strobe and Amber are relatively simple and easy to program, Cypher is quite the opposite. The interface has so many knobs and sliders it may be slightly intimidating. 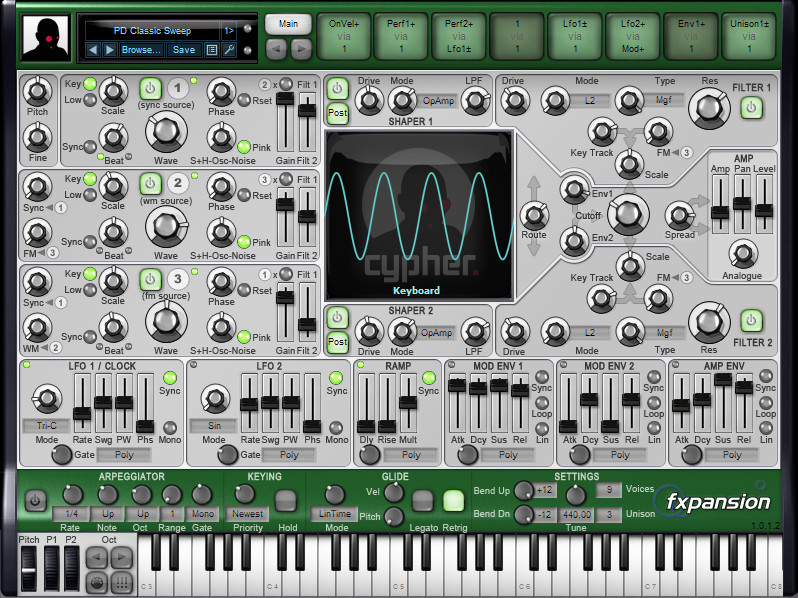 The ethos behind Cypher is to provide a truly accurate model of an analogue synth capable of analogue-style FM and other audio-rate modulation (as opposed to multi-operator FM such as that found in Yamaha DX-series digital synths). It features thru-zero FM which allows musical digital FM-style sounds with an analogue-style circuit.

Some examples of analogue synths that feature FM are the SCI Prophet 5 and Roland Jupiter series, which allowed one osc to modulate another. Most modular synths also allow you to patch any audio-rate signal to vary the osc frequency.

Some of Cypher’s highlights:

Alright, here’s where I should probably direct you to the manual because there is a LOT to tell about Cypher and frankly FXpansion did a much better job explaining this synth in detail than I ever could. So let me try and keep it short since we still have to take a look at Fusor as well.

Cypher’s oscillators can be modulated with FM (frequency modulation) and WM (wave modulation). Unlike the slow LFO modulation, these audio rate modulations can modulate parameters at much higher rates. The manual includes 8 pages explaining Cypher’s oscs if you want to know more.

Cypher has a beat control for each osc, which detunes the oscs against another while keeping the rate of the resulting beating constant across the keyboard. Here’s how this can sound.

In the next audio clip I am playing with the FM & WM controls.

Fusor is a semi-modular layering environment, which allows you to load any combination of up to 3 DCAM synths to create your very own super synth. 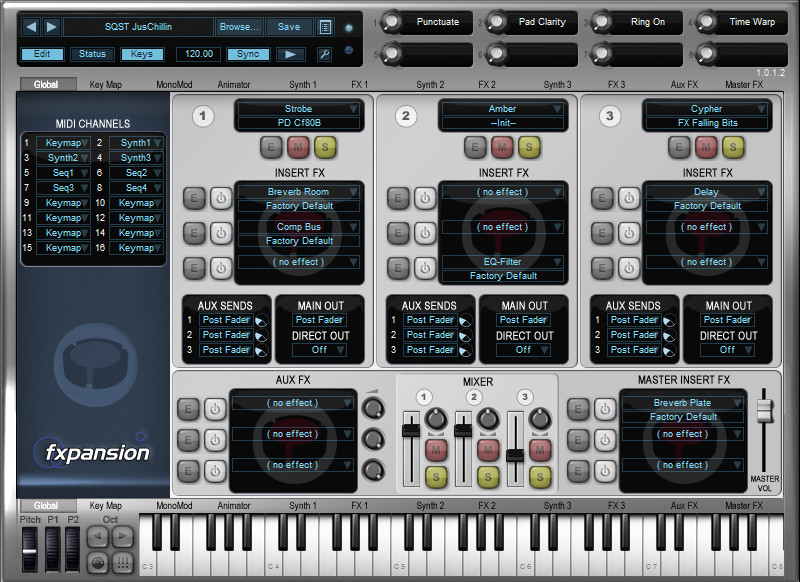 In the top and the bottom of the GUI there is a set of tabs which will bring up the various screens/pages in Fusor.

Fusor really feels like a super instrument. It is great for building big layered sounds with lots of effects and modulation going on. Here’s one I did layering 3 synths with various key zones and a bunch of effects assigned.

The Animator is a great tool for creating moving sounds. The step sequencer is perfect for creating rhythmic patterns. 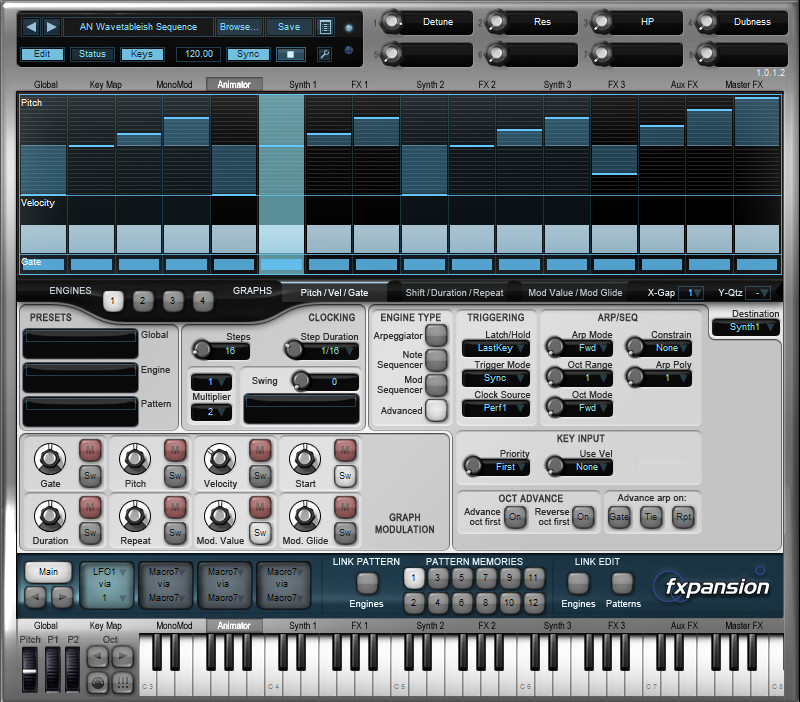 The melody in the following audio clip was done in the Animator. In my host I just ran the transport to get the sequence to play.

The audio clip below puts the following effects on the same loops, one after the other: Breverb Plate, Filter Mod, Freezer, and Amber Chorus.

There are also a number of X4 Quad FX, with 4 bands of the same effect running in parallel. These are X4-Filter, X4-Drive, X4-Comb, and X4-Delay.

Again, there is a lot to write about all these features so if you want to know details please check the manual.

DCAM: Synth Squad has a lot to offer, especially to those who are willing to spend some good time getting to know each one of these plug-ins well. I personally wasn’t totally impressed with the included presets, but you don’t need a lot of time with Synth Squad to know that these synths pack some serious punch.

The sound quality is great to my ears and the synths sit well in a mix. You can get some great results for both analog and digital sounds, as the three synths cover a lot of ground. Fusor is a lovely environment for creating super instruments, tons of effects, easy layout, top notch!

The common interface sections help you get familiar with the controls/parameters fast.

That said the many features of the complete package can still be a little intimidating at first, especially if you are new to synthesizers. CPU usage can be a problem on older machines. My dual core Intel machine does OK, but one should not attempt to run many instances of heavy Fusor instruments on such hardware.

FXpansion has just released a demo version so make sure to give it a go (FXpansion account required, free registration). Audio clips and demonstration videos are available on the FXpansion website as well.