What started with a tweet in which Imogen Heap mentioned Soniccouture’s Xtended Piano, ended up in a truly unique instrument library for Kontakt: Box Of Tricks.

Every aspect of Box Of Tricks has been shaped by Imogen Heap. An exclusive selection of her instruments, sampled in detail and with custom scripts, effects, and tools; all designed the way she wanted to use them.

Box Of Tricks has already been beta-tested in Imogens live performances and studio projects: a process that helped generate ideas and refine the instruments. From an initial idea about a free Heap instrument, to the final result, 3 years later; Box Of Tricks is a truly extraordinary collaboration.

Let’s take a closer look at the instruments. 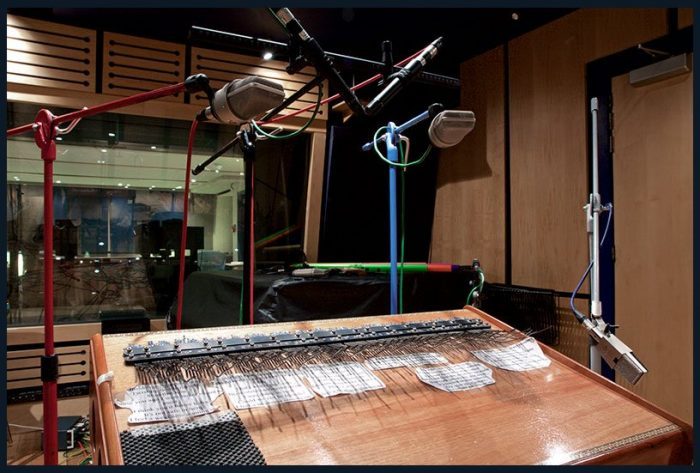 First up is the Array Mbira, a huge 5-octave thumb piano instrument. With 9 velocity layers and such a large range of notes, this instrument sounds most beautiful.

For Box Of Tracks, Soniccouture has extended its Jammer generative arpeggiator to include some of Imogen’s ideas.

The “Jam Wheel” allows you to generate up to 12 MIDI patterns, using a variety of scales. Each pattern can evolve over a set number of steps, and you can set parameters like random notes, octave, velocity, random timing, gaps, and swing.

Switching from evolve to loop mode will let you capture the last few values generated in the evolve mode, so you end up with a looping pattern that doesn’t change over time anymore.

In the video below I’m using the Jammer with the Array Mbira.

You can even record the MIDI output from the Jammer and drag & drop that into your DAW for further editing.

All of the instruments in Box Of Tricks include this wonderful Jammer script. 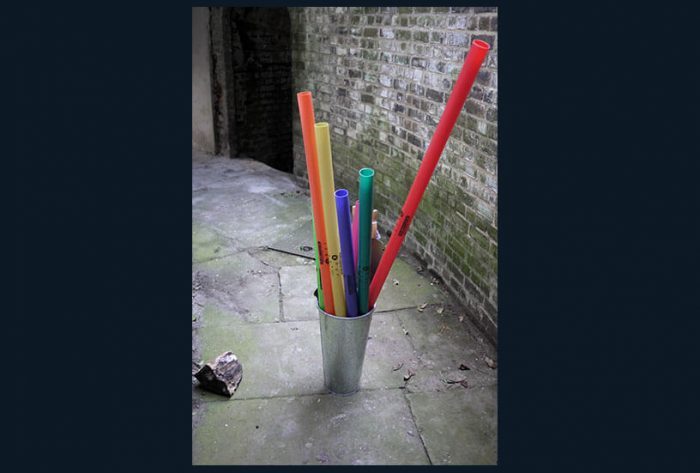 The next instrument features the sounds of Boom Whackers, a set of tuned plastic percussion tubes.

These were recorded with no less than 32 velocity layers, played with wooden and carpet covered paddles. The articulation can be toggled from the interface, or by using key switches. These can easily be set by selecting a MIDI note from a dropdown list.

In the Array Mbira video you may have noticed controls for “Reverse”, “Slim”, and “Strum” on the instrument panel. Each instrument has its own set of special parameters. Boom Whackers comes with controls for setting velocity to volume, and transients can be tamed with a “Smooth” knob. 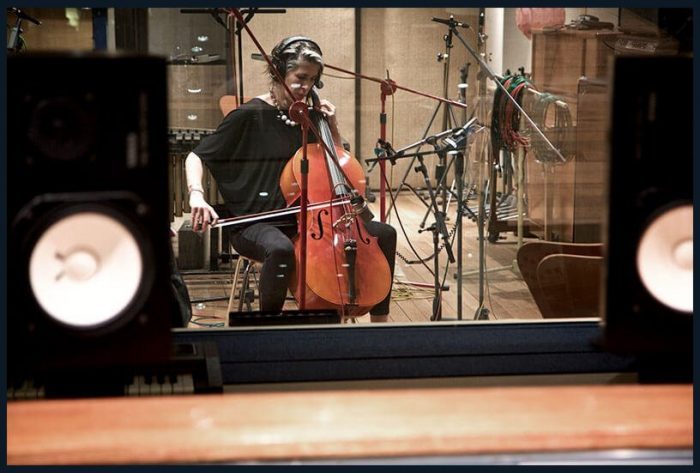 The Cello instrument includes 4 articulations: Pizzicato, harmonic slides, soft bowing, and reverse pizzicato. It comes with 16 velocity layers (for the pizzicato) and 3 round robins.

It’s not a conventional cello, but more like an effect. It’s the way Imogen plays it and I really like the sound of it, a bit dark and cinematic. The level of the cello can be continuously modulated with a dedicated fader for realistic expression.

Cocktail Kit with Nibbles is the first of three drum kit style instruments. These have a bit of a different interface. 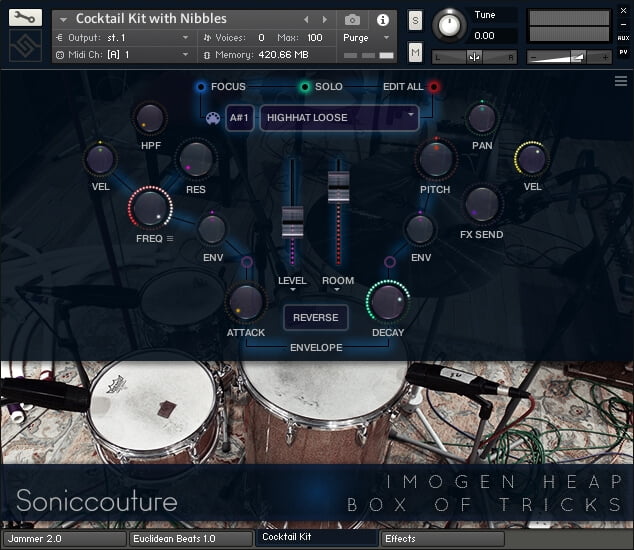 This jazz drum kit is mapped in colored sections for kick, snare, hihats etc. Some additional percussion is also included. With up to 64 velocity layers this is one dynamic kit.

You can map a single sound across the keyboard with “Focus”. Each sound can be edited individually, and a handy “Edit All” button lets you change parameters for all sounds. Sounds can also be soloed.

As the kit is recorded both dry and with room mics, you can set the amount of room for selected sounds.

While you can get some interesting results using the Jammer on this kit, Soniccouture included a beat generation script based on Euclidean mathematics. By setting steps and hits for 6 sounds, you can quickly come up with some complex beats. Check the video below to see how this works.

Euclidean Beats is easy and fun to work with. Just like with the Jammer, you can drag and drop MIDI in your DAW to further work on your beats. Nice! 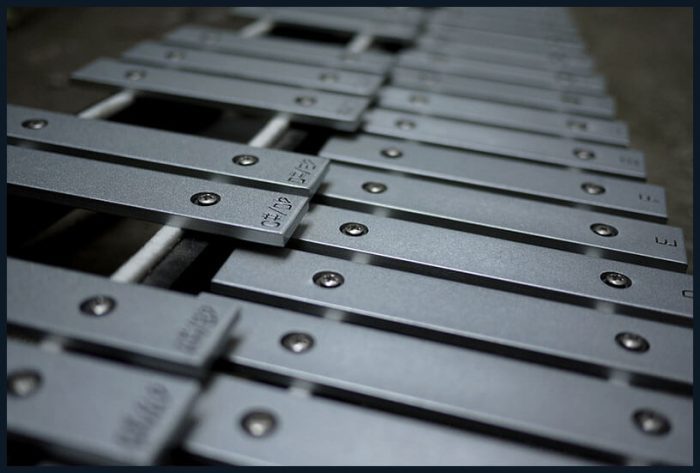 Frequently used by Imogen, the 2.5-octave Glockenspiel is sampled with 11 velocity layers and 3 round robin layers.

The interface doesn’t really have any special controls, except for the “SLIM” control mentioned earlier. This is some kind of equalizer that can boost the smaller details of the instruments by reducing the fundamental frequency of each chromatic note. Another one of Imogen’s ideas! 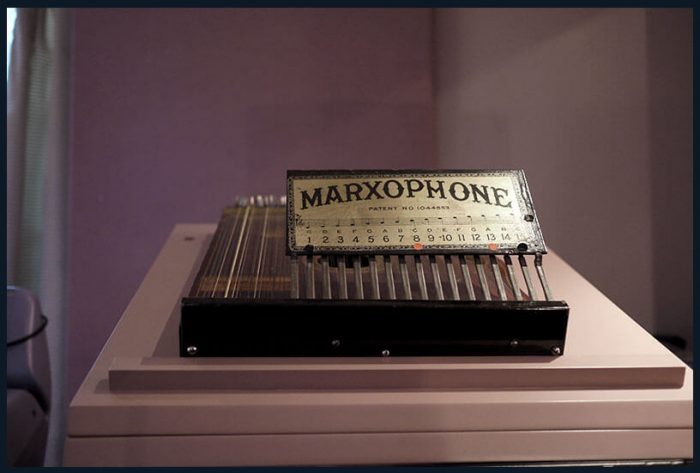 I love the sound of zithers, so I was happy to find a Marxophone in the collection. This fretless zither has metal hammers which can bounce off the strings.

The instrument was sampled with 9 velocity layers. Bot single notes and major and minor chord strums are available, and you can set bounce on or off for the single notes, and key-off samples are also included. A handy split keyboard map is also provided. 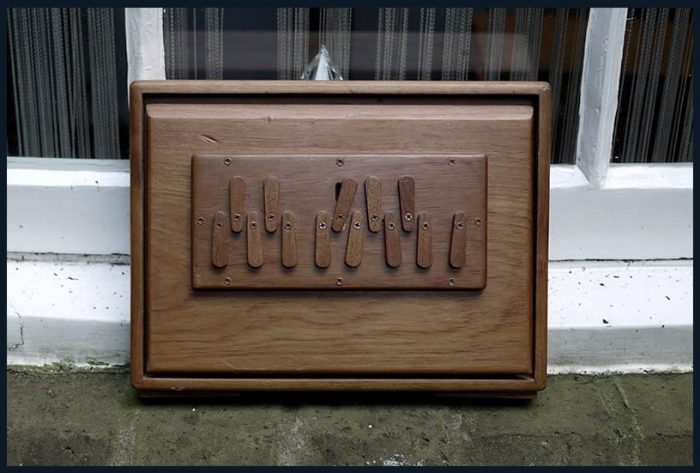 The Shruti Box is a harmonium type of instrument that is used a lot to make drones.

The sampled instrument was a gift from Imogen’s mom. In Kontakt you get controls to set and modulate the amount and drift of the pressure applied to the instrument.

The presets also include some lead, bass and pad sounds, demonstrating this to be a more versatile instrument then you might expect. 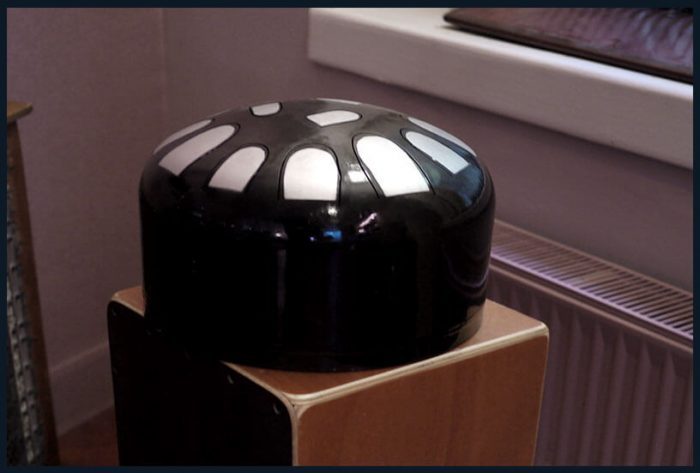 Imogen’s Tongue Drum looks like it’s a steel one from Rockcreek Steel Drums, a cross between a traditional Caribbean steel drum, a wooden tongue drum and a Kalimba.

It has 10 velocity layers and 3 round robins, and it sounds just lovely. Start the Jammer and you get instant dreamscapes. 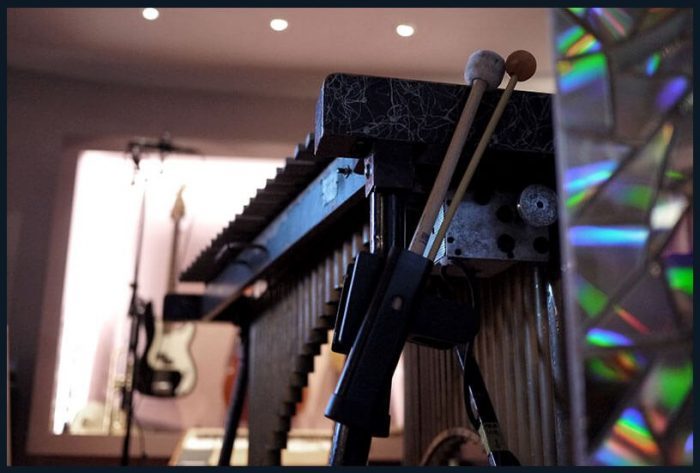 The next instrument is the Vibraphone. Normally played with mallets, this particular vibraphone was played with fingernails.

Additional articulations include bowed decay and bowed looped, and reverse. The interface has controls for the fans so you can control the tremolo of the instrument.

I’m starting to sound like a broken record here, but the vibraphone sounds absolutely lovely. Vibraphones make me want to watch some Jazz Noir Detectives.

The Vocal Pad is something special. Just have a listen at the track below by Guy Sigsworth.

Imogen’s dry vocals can be mixed with a spectrally processed Ghost channel, as well as a reversed sample set. The “Pad” control takes out some of the breathy attack so you get a more synth like choir sound. The Vocal Pad loves to be harmonized.

Want to hear more of Imogen? You will like the next kit. 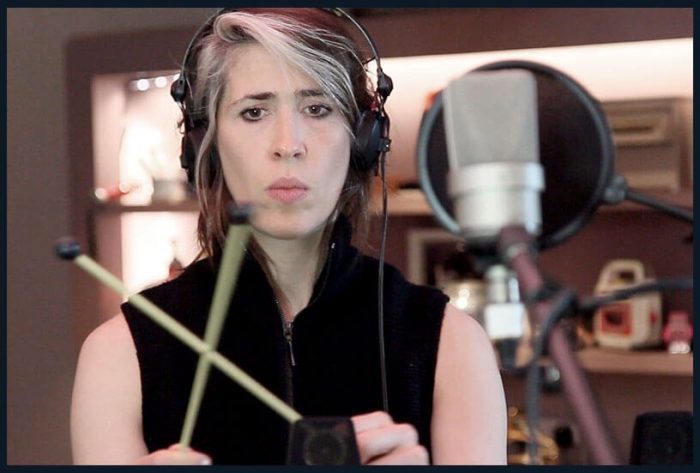 For the Vocal & Body Percussion Kit, Soniccouture recorded over 60 sounds of Imogen’s voice and body, and some objects in her studio. Stamps, belly hits, shouts, mouth pops, kisses… and lots more.

This instrument includes Euclidean Beats so it’s easy to make some interesting rhythms with these sounds. 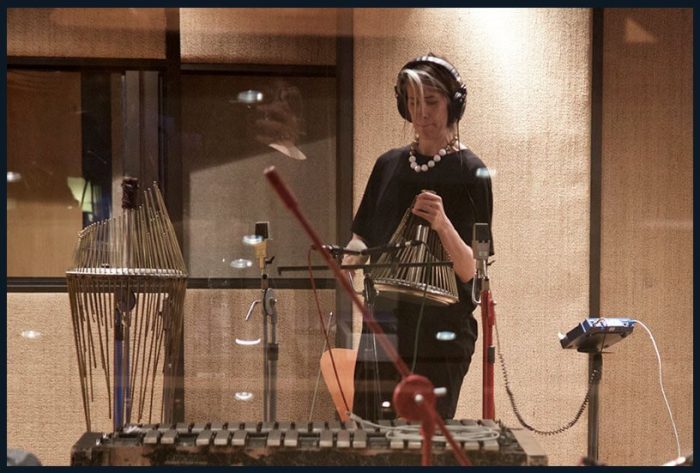 If you’re into creepy sounds, you will love the Waterphone instrument.

Based around one long performance by Imogen, the instrument features a wide variety of waterphone sounds, 128 in total. 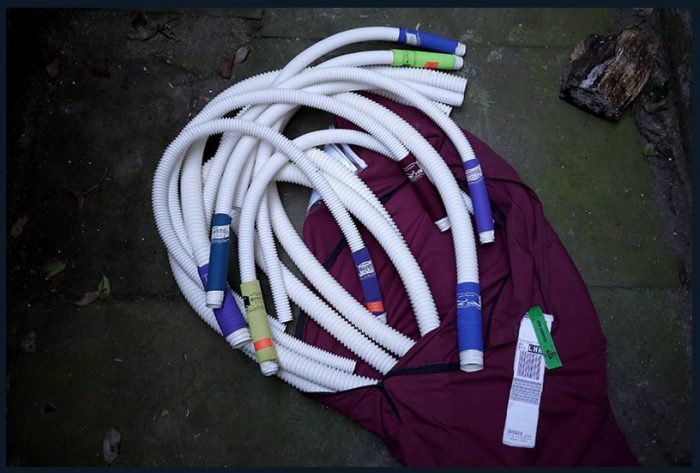 When swung around, they produce sound and if you swing faster it creates extra harmonics, which you can control with a knob on the Kontakt interface.

Possibly the most unusual and haunting in the whole collection, according to Soniccouture.

All of the instruments also have an effects panel. 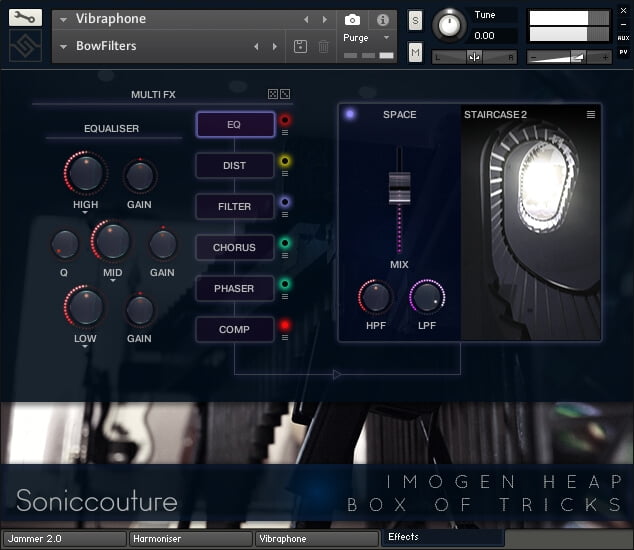 Here you can set up to 6 insert effects from a total of 17 available effects. A set of magic dice will let you randomize the effects (but not their parameters).

On the right of the panel you’ll find the “Space” module, a convolution reverb. The nice thing about this is that you get a bunch of impulse responses from Imogen’s roundhouse, including the studio she uses to record her instruments. How cool is that?!

How wonderful it is to get a look into the creative mind of someone like Imogen Heap, get access to the very instruments and sounds she uses in her recordings, and then have Soniccouture turn all that into an amazing collection of instruments that you can just play from behind your computer?

Each and every instrument in Box Of Tricks is wonderfully recorded, and the Kontakt scripting really takes things to another level. The Jammer, Euclidean Beats, and Harmonize scripts are truly inspiring. Be warned: You’ll easily spend hours playing around with these great sounds and tools!