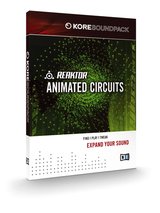 Native Instruments’ latest SoundPack is Reaktor Animated Circuits, a collection of four classic Reaktor ensembles and the new Spiral MIDI instrument for use in KORE (and the free KORE Player).

Here’s a video of Spiral in action.

Spiral is a MIDI instrument, so it doesn’t actually produce any sound but rather acts as a sequencer, triggering other instruments. Spiral features various algorithms to create patterns and many of its parameters can be controlled from KORE or KORE Player.

Reaktor Animated Circuits is available as a download for $59 USD / 49 EUR.

This SoundPack is beautiful. I am not going to get a huge amount of use from it in my music, but I do enjoy playing around with self-generated sounds a lot, so for me Reaktor Animated Circuits is absolutely great.

When I reviewed Absynth Twilights I mentioned it was a bit of a YMMV product. The same goes for this new one — perhaps even more so.

Reaktor Animated Circuits features some amazing sounds and experimental musicians will probably find good use for its sounds in their works, but Reaktor Animated Circuits actually seems more like eye candy (for the ear, and the eye when using Spiral in Reaktor) to me than anything else.
That’s not a bad thing, but don’t expect you are going to be playing these sounds. They’ll be playing themselves!

Reaktor users who have ensembles from Bernd Keil, Dieter Zobel or Rick Scott in their favorites folder should have already downloaded their free copy of the Spiral ensemble from the NI Service Center. It’s awesome!