Sample Magic has quite a track record when it comes to high quality sample libraries. Up to now most of its titles feature sounds for electronic dance music like (Tech) House, Minimal, Dubstep, etc. With Soundtrack & Chill, Sample Magic takes on a new direction. 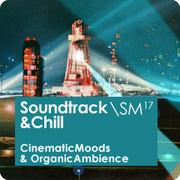 A year in the making, and featuring live violas, vibes, pianos, vocals, guitars, sax, keys – as well as field recordings and some genuine (and rare as hell!) 18th Century cylinder speech, SM17 is truly something new for us at SM.

With Soundtrack & Chill producer James Johnson presents a large range of material created from many sources, including a bunch of Korg and Yamaha synths, an Analog Systems modular synthesizer, as well as soft synths like Camel Audio’s Chameleon.

James processed the sounds with outboard equipment such as the Tascam 42NB, a tape machine which adds analogue tape saturation.

In the booklet James writes:

Great care and attention was focused on the A/D conversion process for this library, with the sole intent of recording each instrument’s unique and subtle nuance, overtone, and at times grainy rawness, as accurately as possible.

Also included in this library are some orchestral one-shots by Sonokinetic, and vocal contributions are by Lisa DeBenedictis and Emily Richards.

Here’s an overview of the content available in Apple Loops, Acid wav, and REX formats.

A folder with patches for EXS24, Kontakt, HALion, and Reason’s NN-XT is also offered. These patches basically map the samples from the various folders across the keyboard, which can be useful for auditioning the sounds.

Listen to Sample Magic’s official Soundtrack & Chill demo track to get an idea of what this library sounds like.

Depending on what you are expecting from Soundtrack & Chill there could be a few hit and miss moments. The guitar section for instance has lots of sounds that have been processed in such a way that they no longer sound like guitar loops much (glitchy, stuttery sounds, weird hits and whatnot). Now I’m not saying they sound bad — I personally really like them, but I wouldn’t have labeled them guitar loops.

There are also quite a few samples that have audible background noise, especially in the rhythm section with percussion loops that sound like live recordings. It makes the samples more real, authentic & alive to me, but you might also think it’s just sloppy recording/production.

When it comes to combining loops the large variety of sounds is perhaps a limitation here, as Soundtrack & Chill does not seem to have that same level of flexibility I’ve come to expect from Sample Magic titles. Or perhaps it’s just that it takes more effort to make stuff work in this type of genre, as opposed to something like tech house or minimal which are a lot more loop oriented.

That said, the sounds themselves are great. Inspiring, creative, and well produced. And there is plenty of material that is just screaming to be dropped into your sampler, ready to cross over to other music genres.
I came up with this little beat while exploring the Soundtrack & Chill library (main drum sounds are from Goldbaby, everything else is Soundtrack & Chill).

Sample Magic is offering a generous free demo pack for download. It includes over 60MB of samples from this library so go check it out on the website.