First released as a Rack Extension for Reason in 2012, the Echobode frequency shifter and modulated delay effect is now available in VST and AU formats.

The difference between a frequency shifter and a pitch shifter is that it shifts the audio spectrum linearly. E.g. an overtone series of 100, 200, 300 Hz can be shifted by 50 Hz to 150, 250, 350 Hz, making the overtones inharmonic. This effect in itself is great for creating metallic bell timbres, but putting it inside a delayed feedback loop opens up many other possibilities.

Echobode creates an upward and a downward sideband, and lets you suppress these sidebands. By placing this effect inside the feedback loop of a delay, Echobode makes for a rather versatile effect. Besides frequency shifting and delay/echo, it does phaser, chorus, flanger, reverb, ring modulation, and more. And all this comes in a simple, straightforward interface. 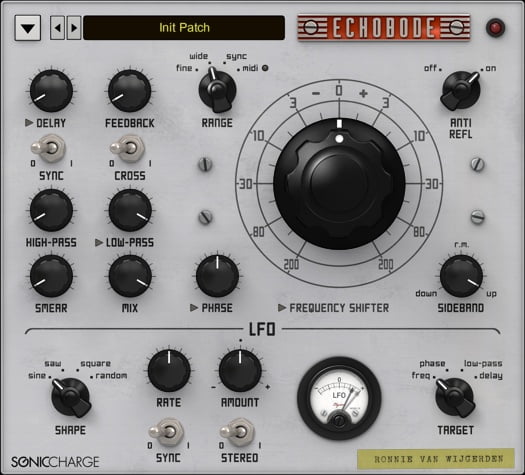 The large frequency shifter knob sets the amount of frequency shifting. The range can be set to fine (-200 Hz to 200 Hz), wide (-20 kHz to 20 kHz), synced to host tempo, and MIDI notes. A sideband control lets you mix the downward and upward sidebands. Sonic Charge came up with “anti reflection” to (optionally) take out harmonics that are shifted down below 0 Hz, or beyond half the sample rate.

The delay can be set free (0.02 ms to 1 second) and in sync (1/128 to 1/2 measures). A cross switch will allow you to swap left and right channels before the output and feedback stage. Highpass and lowpass filters shape the sound further and smearing the phases of the signal spectrum through a section of all-pass delays results in reverb type effects. The amount of dry/wet signal can be controlled with the mix knob.

Echobode features an LFO that can be free running (0 to 100 Hz) and synced to host (8 measures to 1/64). It has sine, saw, square and random shapes. The Stereo switch inverts modulation of the right audio channel. The LFO can modulate the amount of frequency shifting, phase adjustment, the lowpass filter cutoff and the delay time.

Check out Sonic Charge’s demonstration below to get an idea of what you can do with Echobode.

Every now and then you come across something that makes you wonder how you got by without it before. Sonic Charge has a way of creating such products. Synplant, Permut8 and Microtonic are amongst my favorite plug-ins, and now I can add Echobode to the list.

With an uncomplicated interface and just a few controls, Echobode offers a lot more than you would think. This high quality effect goes from subtle to crazy wild with the turn of a knob or two.

Echobode comes with over 200 presets, but after checking a few (and messing with the smear) I got myself into that creative flow that makes time disappear faster than a bowl of cheese puffs.

I can talk about how wonderful I think Echobode is for quite a while, and I can highly recommend it, but you should really just check it for yourself. The plug-in is available for Windows and Mac (VST/AU) priced at $44 USD + VAT.