Sometimes I feel that we have so many virtual instruments and effects that it seems near impossible to come up with something new and exciting.

And then Sonic Charge brings Synplant, completely proving me wrong.

If you’re into electronic beats you may very well be familiar with Sonic Charge’s µTonic (or MicroTonic), Magnus Lidström’s top notch drum and percussion synth.

And if you’re a Reason user that name Magnus Lidström might ring a bell as well. Magnus worked on several things for Propellerhead Software, most notably designing and developing the Malström synth for Reason 2.0.

And now for something completely different

I hope you weren’t expecting I was going to tell you that Synplant is some kind of Malström 2.0… Just take a look at Synplant and compare that with Malström’s GUI.

Right, so let’s focus on Synplant then. Here’s what the product page reads:

Synplant is a software synthesizer with a genetic approach to sound creation. Instead of creating patches the conventional way by turning dials and knobs, Synplant lets you explore a world of organic sounds by planting seeds that grow into synth patches.

Aha, the lack of controls on that Synplant GUI is intentional! Btw, note how it says it has a genetic approach to sound creation, not generative. Although Synplant uses a generative synthesis engine, it isn’t actually a generative music system (you might’ve thought so when seeing the circle of notes on the interface…)

Synplant invites you to take a different approach to sound creation. Using seeds to plant, and branches to grow sounds isn’t something I’ve ever seen before.

Without going into the details of what kind of synthesizing goes on under the hood right now, Synplant is extremely easy to use:

This is quite an intuitive process. You listen to the changes in sound when growing branches. There are four sliders around the seed’s bulb allow you to influence the sound. 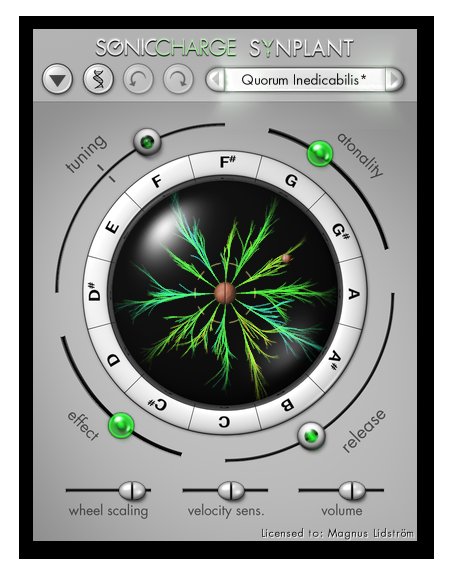 Tuning allows you to adjust the pitch of the entire plant, up to one octave up or down and Atonality determines the type of sounds the plant will produce: musical and “playable” sounds, or atonal sound effect type sounds. The Effect slider adjusts the effect mix and panning amount, while the Release slider controls the time it takes for the sound to fade out after releasing keys.

All of these except Tuning will preserve their settings when creating a new random seed, so you can influence the general type of sound a new seed will generate.

With the above-mentioned controls you can get some great sounds, but you may still have a hard time getting the exact sound you’re looking for. Now perhaps Synplant isn’t exactly the right synth for you if you want program your sounds rather than “finding” and tweaking them, but there’s more to this instrument than meets the eye. 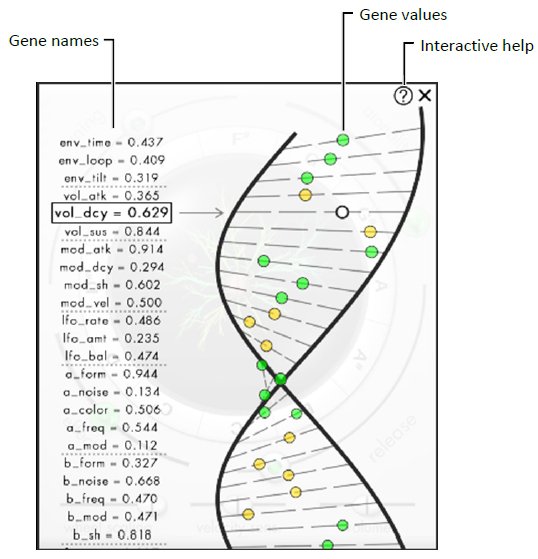 The little DNA-type button in the top of the interface opens the Gene Manipulation window. Here’s where you can get your hands dirty and do some genetic manipulation on any of Synplant’s 37 genes. You’ll find some control look like regular like synth parameters (i.e. a_mod, lfo_rate and flt_freq), but these aren’t always what they seem to be…

Please be aware that although you may find some of them similar to the controls commonly found in other synthesizers, Synplant genes should not be confused with traditional synthesizer parameters. Many genes have a fairly complex relationship with each other and their scales and response ranges have been extensively tuned so that useful sounds can be created out of random “mutations”.

The Synplant manual comes with a complete list of descriptions of each gene so you know exactly what you’re doing when adjusting these parameters.

Though I don’t think you’ll want to create patches from scratch in the Gene Manipulation dialog much, it’s good to know that you can fine-tune the seed. Note that the branches of a seed could still sound totally different as the seed you’re editing, because they mutate and differentiate from the seed and you can’t control those changes.

Other bits and pieces

There is more to Synplant (the mod wheel ring & wheel scaling, MIDI options, undo/redo, patch manipulation etc.) but I’ll leave those things for you to figure out yourself. The Synplant demo version has a very generous 3 week trial period in which the plug-in is fully functional so there’s plenty of time to explore all of its features.

Synplant comes with a wide variety of patches, showcasing its capable of much more than the experimental sounds you might expect from a synth that grows sounds from seeds.

It’s not like I haven’t used any synths with great randomize features before, but Synplant is a breath of fresh air. I love its simple interface, the sound manipulation is focused on listening to where you’re taking something rather than programming it, yet Synplant still retains a good level of tweakability in its controls & genes. Oh, and it’s tons of fun to play with.

Although perfectly capable of doing a wide variety of bread & butter type sounds, Synplant is probably most useful for those other kind of sounds. Its wonderfully unique and inspiring sounds become the center of a new piece of music in no time.

Synplant is available for Windows and Mac and costs $89 USD, which I think is a great price. You can check the Synplant product page for some audio demos, or try the demo version of Synplant.

I don’t usually rate anything here, but if I would have to this easily gets a 5/5 score.