So, what is a Gamelan?

A Gamelan is an ensemble of instruments originating from Indonesia. The majority of Gamelan instruments are percussive, and most of these are bronze. They include xylophone-like metallophones of different sizes and pitch, tuned gong chimes, very large pitched gongs, and an assortment of drums and percussion. There are many types of Gamelan ensembles, but the two dominant types are Javanese and Balinese. Balinese Gamelan has a characteristic ‘shimmering’ sound which is due to the detuning of paired instruments playing the same musical part.

It seems no two gamelan ensembles are the same. Each instrument in a gamelan is built and tuned to be part of one specific ensemble.

Apart from traditional gamelan music, its sounds can also be found in many film soundtracks (i.e. Akira) and even in modern dance music.

Soniccouture’s Balinese Gamelan features samples of a “Semara Dana”, built in 2004 by I Made Gabeleran of Blahbatuh, Bali. 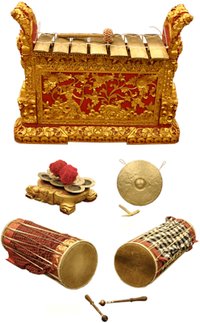 The included full color 24 page booklet is well worth a read and has detailed descriptions of each instrument.

Like Soniccouture’s Hang Drum library, Balinese Gamelan uses Kontakt’s KSP scripting to humanize the velocity and timing for a natural response. Since many instruments in the gamelan are played as a detuned pair, both single and paired versions are available.

Since the instruments of the gamelan are tuned to each other rather than to any traditional tonal system, you’re probably going to run into some problems using this library with your regular instruments.

Not to worry, Soniccouture to the rescue!

Detuning other instruments about -35 cents should work, but you can also use Soniccouture’s Concert Pitch Update.

Depending on your point of view, this update is either a saving grace or complete sacrilege. Some of you will appreciate the chance to play the gamelan instruments in western tuning, and some of you will just ignore this version and tell us we’ve sold out. Nonetheless, in fairness to all the different types of musicians out there, here is a Gamelan Set tuned to western equal temperament.

Check the demo mp3s on the gorgeous Balinese Gamelan mini-site for some examples of soundtrack type music featuring this gamelan.

Let me start by saying I’m a bit biased when it comes to Soniccouture. It seems everything they do is of exceptional quality and their product range shows they’re not just another company doing “dime in a dozen” sample libraries.

This Balinese Gamelan library is no exception. Soniccouture has captured the unique instruments of the gamelan with amazing detail, bringing a complete ensemble to your fingertips.

There is only one downside… it’s $499 USD. If you are slightly shocked by this price, you are probably not the target audience for Balinese Gamelan. Soniccouture has filled the gap in a niche market with this one of a kind collection of instruments.

So, if you’re serious about gamelan sounds, Balinese Gamelan is just what you’ve been looking for.