Soundiron’s Rust 3 is the latest in its series of found-sound percussion sample libraries for Native Instruments Kontakt.

With this grand 3rd volume, we set out to conquer powerful bass and rich musical tone, recording a massive variety of surfaces, objects, oddities, apparatuses and custom contraptions very up-close in wide stereo to capture even the most subtle of resonances and overtones.

We aimed for a collection that would offer uniquely alternative drum kit concepts, richly complex tuned percussion, dramatic effects and stingers and a huge wealth of sustaining lead, pad and ambient instruments. We reached for crystalline highs and mind-melting lows. We wanted a library that could stand on it’s own, capable of producing limitless musical potential all by itself.

Rust 3 features at a glance:

Have a listen to the Rust 3 audio demos below to get an idea of what this is all about.

The patches of Rust 3 are grouped in 4 folders: Ensembles, Sustains, Master, and Effects.

The Ensembles section includes 7 instruments, with original (untuned) and tuned variations, so 14 patches in total. The sounds were recorded from a variety of objects, including large 50 gallon chemical drums, garbage can lids, garden tools, a cattle corral, various pipes and rods, and custom percussion instruments. A number of articulations is available – e.g. hands, sticks, mallets, etc – and the sounds are basically laid out like percussion kits mapped across the keyboard.
The tuned patches take a single tuned articulation from the full range of sounds included in each ensemble, and tunes and maps it across the keyboard. Articulations can be switched in realtime with MIDI CC, which can also be automated.

The three included Sustains patches have a focus on drones and ambient soundscape type sounds. The sounds in these patches can be morphed and polyphonic legato is available from the custom Kontakt interface panel.

The Master section includes a number of patches with combined instruments. 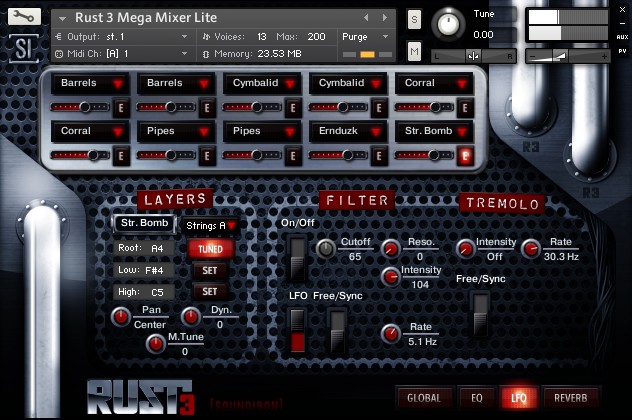 The MegaMixer patches allow you to create custom ensembles, with up to 10 instruments, each with independent tuning and mapping arrangements.

The master patch includes all percussive patches, and a lite version with less round robin samples is also included. The MegaMixer and Tuned Layer Builder patches allow you to construct your own ensembles by using 10 to 12 layers respectively.

The Effects section features 12 patches in both Kontakt 4 and Kontakt 5 format. The Kontakt 5 patches use the improved Time Machine Pro engine for a more realistic time stretching. The patches include sounds effects made by scraping metal objects, using violin bows, and other techniques.

Rust 3 includes a number of custom panels for quick access to parameters to modify the sounds, including the ever lovely “Uberpeggiator” custom arpeggiator, convolution reverbs and more.

For a more detailed overview of what’s included with Rust 3, check out the official walkthrough video below.

Rust 3 is a beautiful library, chock full of useful sounds.

By itself, the general vibe of the library tends to be a bit dark/creepy/haunting, which is great for cinematic film and game projects. Individual instruments will also blend in just fine with pretty much any other music genre, though the reason why this library (as well as other Rust libraries) is in Soundiron’s experimental category is obvious. I am not saying you shouldn’t use Rust 3 in your dubstep tunes, but I reckon you’ll get better mileage when you’re into junk percussion and original designed instruments with a metal vibe.

In short, I am well impressed with Rust 3. The sound recordings, instrument design, and Kontakt scripting all contribute to a deliver another top notch library.