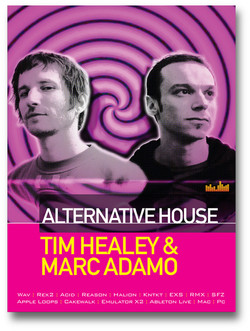 DJ and producer Tim Healey has quite a number of releases, remixes and productions on his name.

From Tim’s MySpace page: Tim is a purveyor of super-trash ghetto-electro to the needy and sleazy dance-floors of the world. He is available in producer and DJ formats. On half of production-duo COBURN, he has released on labels as diverse as Data/Ministry Of Sound and Instereo, and he has wowed crowds at events as far-flung as Pacha, Sao Paolo and Fuji Rock Festival, Japan.

It was when Tim and producer Marc Adamo got together for Ghetto Blaster that the idea of Alternative House was born.

When we teamed up to produce the Ghettoblaster record, which we signed to Instereo, we decided to both archive our collections and create a slew of fresh sounds for a Loopmasters collection.
Here, we have assembled the building blocks for you to make produce of the most kick-ass sounds you’ve probably ever had in your studio.

The drum loops are available in full loops and elements, so you can mix and match them yourself. The — generally in-your-face sounding — basslines are available in three keys (A, G and E). Synth and music loops with hits and melodies in various keys (labeled in the filename) include a wide variety of sounds, a nice inspiration.

Tim and Marc used lots of hardware to create the samples: Nord Modular G2, Moog Voyager, Roland SH-2, Juno 60 and TB-303, Future Retro XS, and a home made Sid Synth to name a few. Various outboard processing was done to spice up the sounds.

Tim Healey and Marc Adamo Alternative House is available for download in various formats for £34.95 GBP.

The drum loops are of good quality, but some variations are almost single shot type sounds (i.e. loops with just some claps or snare sounds). Nice to mix in with other elements I guess, but I prefer using regular single shot samples and sequence them myself.

Luckily there’s also a lovely collection of single shots, so no complaints there. Many samples are kind of glitchy and heavily processed. Not your run of the mill type sounds, which I can appreciate.

Alternative House provides plenty of bassline loops. Many of the sounds are quite rough and edgy, but they still mix very well. Tim and Marc said that “in 2009, it is all about the bass”, and to me, the basslines do indeed stand out in this collection.

The synth and music loops are pretty good as well. I will probably use them mostly for slicing and dicing in my sampler.

As a whole this product does sound a lot like something Tim & Marc would use in their own productions. All in all a very nice sample library for electronic music genres.