Tone2’s latest synthesizer instrument Nemesis aims to take FM synthesis to the next level with NeoFM, which offers a “genuine FM synthesis” approach.

Most conventional FM synths such as the DX7, use phase modulation (PM) instead of genuine FM synthesis, yet such synths are branded as FM synthesizers for marketing reasons. However, the traditional PM approach is limited to using dark sounding waveforms like sinoids or triangles, which results in a dull or bell-like sound. Classic waveforms like a sawtooth do not work well with it because they result in an unpleasant, sharp and excessively metallic sound.

‘Real analog FM’ suffers from drift and lacks precision, resulting in a disharmonic sound, which is musically not very useful. The innovative neoFM approach, exclusive to Nemesis, combines only the advantages of both types of synthesis without suffering from any of the weaknesses associated with PM or ‘Real analog FM’ synthesis.

Nemesis features 22 synthesis types that can be combined in 2 oscillators to expand traditional FM synthesis with other methods like additive, wavetables, phase distortion, formant, waveshaping, sync and reso synthesis, and more. You can use your own samples as waveforms as well, and editing of waveforms is easy with the additive spectral editor. 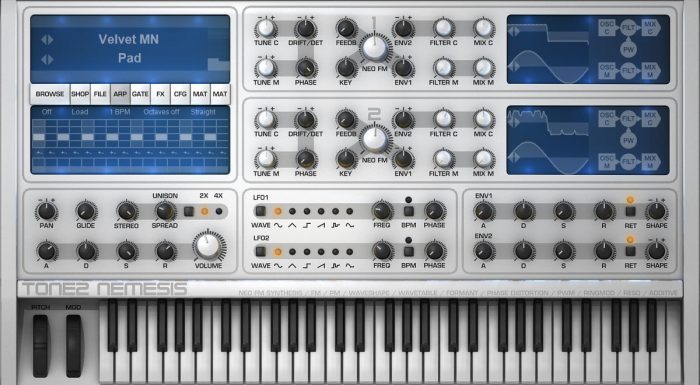 The Nemesis interface, similar in style to the RayBlaster, Saurus & ElectraX synths.

The oscillator section has a carrier and modulator oscillator, with tune, envelope, filter, and mix controls for each. The filters are a bit different in that they are very steep (90dB slope) 0-phase filters which operate directly on the waveform. This means that as you turn down the filter it filters out the partials.

The oscillators also have drift/detune, phase (start phase of waveform), feedback, and an FM keyfollower for the Neo FM knob, which controls the amount of FM applied to the oscillator.

From the oscillator display you can select one of the 22 synthesis modes, the active one being shown on the right side of the screen. Both carrier and modulator oscillator waveforms are dynamically updated so any chance will be reflected in this screen.

A large selection of waveforms is available, and you can also load your own samples and resynthesize waveforms.

Want more control? The additive spectral editor lets you manipulate the partials and phase of waveforms.

The additive editor of Nemesis can handle the first 32767 partials of any waveform and you have detailed control over the phase of the waveform. This can make a significant difference in the sound, especially when the oscillator is played at a low frequency.

The first 16 partials can be modified directly from the oscillator display with sliders, the higher partials and phase are changed with modifiers, which are destructive. However, you can export your waveforms so if you’re working on variations you might want to keep make sure to export often.

As it befits Tone2, they have also included a well featured arpeggiator, a flexible dedicated gate, 2 FX slots with 33 effects, and a bunch of voice and audio settings, including various modes for play, glide, re-triggering, boost, micro-tuning, clip, punch, and eq.

A 12-slot modulation matrix lets you easily set up sources and destinations from drop-down menus, including the 2 LFOs (bpm syncable) and 2 envelopes available in Nemesis.

Nemesis comes with well over 1,000 patches, including arps, bass, leads, pads, keys, synth, fx, and many more. Check out Tone2’s demo below to get a taste of what this synthesizer sounds like.

I have to commend Tone2 on once again doing something new. You would think FM synthesis has already been well covered with the synthesizers from the 80’s and Native Instruments FM8 software instrument.

Still, Nemesis manages to take a fresh approach, delivering a feature set that allows you to get the sounds that made 80’s pop music, as well as the sounds of current EDM genres like dubstep or trap music.

The synthesizer is easy to use, and sounds great. I would tag it “digital” and “crisp”, though you can also get some really smooth analog type sounds from it. It is quite a bit more versatile than I had expected.