Rhythmic Robot has announced the release of Doctor 33, a virtual instrument for Native Instruments Kontakt, sampled from a Boss DR33 analogue metronome unit. 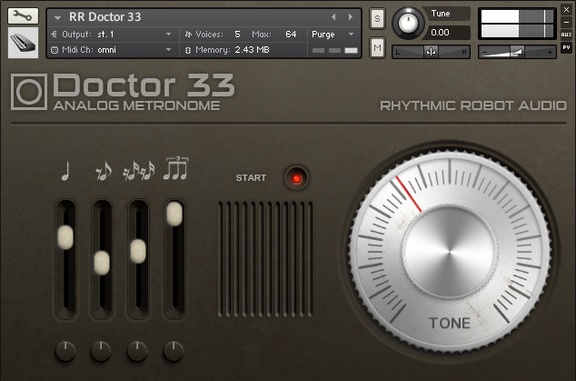 Doctor 33 provides a handful of little ticks, bips and clicks to play with, plus four tempo-syncable rhythms.

Doctor 33 is a strange little creation from those funky folk at Boss. Unlike its big brothers, the Doctor 55 and Doctor 110 beatboxes, Doctor 33 isn’t a drum machine – it’s a metronome. Still, it creates a variety of little analogue clicks, blips and ticks which have a fun percussive style of their own; it hosts four combinable onboard rhythms, which we’ve tempo-synced to your host DAW (these include triplets, which can be rather cool); and we’ve grafted on a “Tone” control which actually brings a strongly resonant gritty-sounding filter to bear on the metronome sounds. Sweep this while the rhythms are playing and you can get some odd, engaging effects going, particularly if you layer it over a proper drum beat.

The percussive sounds can be level-adjusted and panned, and played along with the onboard rhythms if you wish. All in all, Doctor 33 is a neat little box for adding some analogue oddness to the background of your beats.

The library is a free download at Rhythmic Robot.