Rhythmic Robot has announced the release of 102200 and FadeWheel, two new libraries for Native Instruments Kontakt.

The 102200 was Hammond’s very first (and very strange) analogue synthesiser.

This was Hammond’s first (and only) attempt at jumping on the booming 70s monosynth bandwagon, and they did it with a certain mad panache. Where ARP, Moog et al had sliders and knobs, Hammond’s catchily-titled 102200 (seriously… what were they thinking?) sported a futuristic button matrix that allowed the user to punch in various combinations of filter settings, envelopes, LFOs and so on. Behind the scenes was a capable little synth struggling to get out… but users, baffled by the buttons, ignored it in droves and the 102200 became an oddball backwater in synth history. Until now of course.

The Rhythmic Robot version of 102200 addresses all of the main issues that dogged the original. It’s fully polyphonic; it allows multiple oscillators and presets to be stacked and detuned; and though you can go prod-happy with the button matrix if you want, you can also ditch it in favour of more conventional controls which are hidden away on the rear panel.

The result is powerfully strange, and ideally suited to Radiophonic Workshop-style sci-fi soundscapes and effects. It has a strangely industrial edge to its sound which adds a genuinely original flavour to your tracks, and it ships with over 80 presets to get you started.

We love tonewheel organs, but too often they sound a bit clean and polite for our liking. FadeWheel is designed from the ground up to put “failings” such as leakage, crosstalk, intermodulation and total component failure front and centre, making them the heart of the machine’s sound. This is the antidote to dull Hammond sims!

FadeWheel’s core tone is dialled up using three simple but versatile waveform generators: a clean B3 808000 patch; a more complex, upper-harmonic-rich B3 patch; and transistor Vox patch with a lot of overtones and dissonance. By combining these you can get a wide range of starting points for sounds.

These tones can then be driven deep into the dark side using the Crosstalk, X-Mod and Failure controls, which dial up whatever levels of dirt, grit, graunch, instability, erraticism and mayhem you want. You can even turn the three main operators down and just use the grunge controls to create patches!

Further sound-sculpting comes courtesy of a simple Attack / Release envelope, twin high- and low-pass filters, and a suite of carefully-tweaked vintage effects including the Circulator rotary speaker sim and the Echolator echo effect.

Combining the waveforms with the grunge controls and effects yields everything from recognisable tonewheel or transistor organ patches with a user-definable “age” component through to hissing, sparking, crackling radiophonic sound-design tonescapes with just a hint of tonewheel DNA still discernable through the smoke. FadeWheel is designed to appeal whether you want a classic organ tone, just with more of a vintage vibe (you can even layer it behind your favourite Hammond sim and use its grunge controls to add age), or whether you’re after strange pads and synthscapes with a touch of tonewheel swirl still present.

FadeWheel is available for the introductory price of £12 GBP (regular £15 GBP). 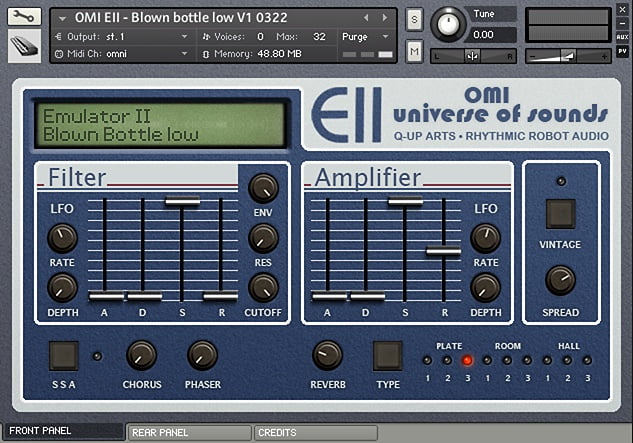 We’ve been in touch with the very nice Doug Morton, of Q-Up Arts. Doug sampled and programmed the OMI library in the 80s, and owns the rights to all the sounds; and we’ve struck a deal allowing us to co-develop the Kontakt version of the official Universe of Sounds collection. This means we have access to every single one of those amazing patches… and we’re working through the night to convert them all into Kontakt form.

This means sampling every original patch, note by note, out of a reconditioned and warmly-humming Emulator II. Every single semitone is being sampled, to perfectly preserve the sound of the EII’s convertors and interpolation. Original loop points are being conserved. The results are indistinguishable from the original, and sound exactly as wonderful as you’d hope: huge, powerful, rich sounds, with that magical EII aura that comes from 8-bit sampling and 12-bit companded convertors.

Clever UI scripting extends the EII’s original capabilities, but also allows you to revert to ‘vintage compliant’ EII behaviour just by clicking the Vintage button on the front panel. This disables all the modern effects, stereophony and filters, and gives you the true original sound of the EII patch. Or you can push things into sound design territory if you want.

The first volume of the Emulator II project is scheduled to be released before Summer 2015.