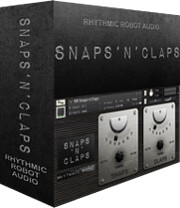 Rhythmic Robot Snaps ‘n’ Claps is a little miracle of simplicity. We sampled a handful (ha! handful!) of finger snaps and hand claps. In fact, we did it twice, with high- and low-pitched variants of both. (At last, Mongo’s outsized hands have come in useful for something.) The front panel is pretty self-explanatory: use the little crank to select how many snaps or claps you want, and hit C4 or D4 for snaps, E4 or F4 for claps. That’s it. Oh, there’s a tuning control to alter the pitch further if you want to.