With Devine’s sonic imprint reaching to automobile audio environments, gaming platforms, and user interfaces for e-readers, televisions, and other electronic devices, chances are you’ve heard his work, even if you didn’t know it. 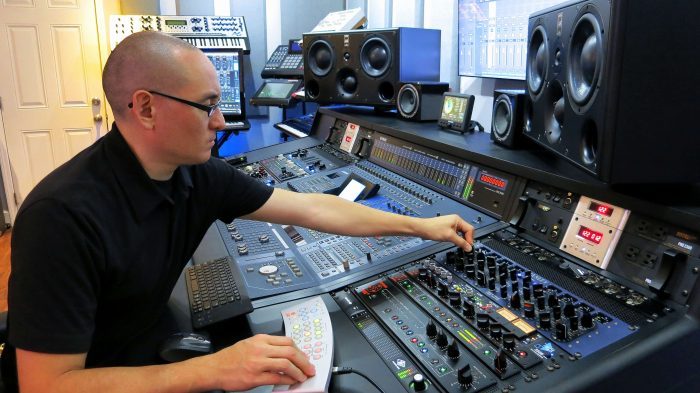 His studio is a retro-futuristic laboratory of synths, towering stacks of modulars blinking and bleeping like the cockpit of a spacecraft. And although Devine has long been a devotee of mixing in the box, lately he’s been eschewing plug-ins in his mastering set-up, favoring the more organic sounds he is able to coax from his analog rig.

Devine owns a large collection of EQs including several vintage models, and was seeking to expand his palette with another EQ designed that in that legacy style. He’d never owned a piece of Manley gear before, but was drawn to the Massive Passive’s versatility and subtle, warm tone. “I was interested in the Massive Passive, because it’s in that classic style of vintage EQs,” he says. “I wanted something that had a little bit more control, and slightly a different flavor than what I already have.”

The two-channel, four-band Massive Passive, with its console, parametric, and graphic equalizers, excels at both dramatic shaping and subtle shading, says Devine. “You can sculpt the sound in really interesting ways, but it’s never harsh; it’s very smooth. But you can still do some radical things with it, which is what really impressed me.”

“The vacuum tube components within it give you this nice, warm tonality to everything that you run through it,” he adds. “Even when you set all the controls at twelve o’clock, with no boosting or cutting, just running the signal through the Massive Passive has such a pleasant outcome.”

The Massive Passive serves multiple purposes in Devine’s studio, primarily on his mix bus, and also in his mastering chains for sound design as well as his own music. “It’s like that perfect end-stage EQ,” he says. “Sometimes you don’t want that much coloration. You just want the right amount, and at the same time have enough controls to shape the frequency spectrum in a way to where you’re not completely destroying the audio material that you’re running through it.”

Devine has found the Massive Passive to be particularly valuable for polishing his work for television, which comes with extremely tight deadlines. “A lot of times, there is no mastering stage,” he says. “So I’ll master the production myself and try to give them the best quality product I can, right before it goes to the sound editors and gets sent off to the network.”

He has been using the Massive Passive to put finishing touches on his upcoming album, an all-analog record created entirely on his custom modular synths. “The whole idea was to just do it all by hand, and do it with analog processing, analog shaping, from start to finish,” he explains. “I wanted to do it like I’m sculpting clay.”

Ultimately, Devine says, he was looking for a flexible EQ for his master bus that expanded his sonic options, offered the functionality he wanted, and was simple to use-and Massive Passive fit the bill. “It satisfied all those requirements for me, and it definitely blew my expectations away in every aspect of that. I couldn’t be happier with it.”