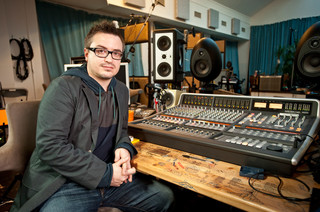 Rik Simpson, Coldplay’s producer, invites us to the band’s North London studio to talk about how he records them, and about his long history with SSL, from working with the G Series as a fifteen-year-old to using the Matrix today.

Coldplay set up the Beehive in 2010, and Chris Martin asked Rik to be involved in the design and build of the new studio. The band recorded the majority of the Viva la Vida at the Beehive with Rik as engineer. Viva la Vida went on to win three Grammys and Rik went on to co-produce (as well as engineer) Coldplay’s fifth studio album, Mylo Xyloto, at the Beehive last year. He tried out the Matrix in the process – and kept it.

The six-minute video of Rik talking about how he records and mixes the ‘Best British Group’ (BRIT Awards 2012) is available here: www.solidstatelogic.com/music/matrix/video.asp