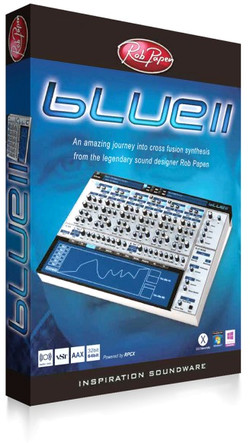 Rob Papen has announced that BLUE II, the successor to the popular BLUE synthesizer instrument for Windows and Mac, will be released on March 10th, 2014.

Blue reflected Rob Papen’s cutting-edge, creative, and musical approach towards developing virtual instruments by first delivering FM and subtractive synthesis, then duly adding Phase Distortion and wave shaping synthesis into the highly creative mix to create one seriously creative combination. Rob Papen himself called it ‘Crossfusion synthesis’ since it covered so much musical ground so effectively.

Blue II remains true to that ethos with even more sound dimensions and features to its extended name, starting with six oscillators beating at its musically creative heart. These can be connected in various ways, together with two analogue-style modelled stereo filters with 27 different filter types, an enormous range of processing and modulation options, sequencer, and an incredibly powerful arpeggiator.