Rob Papen has announced that its BLUE software synthesizer for Windows and Mac is on sale until the release of the upcoming BLUE-II. 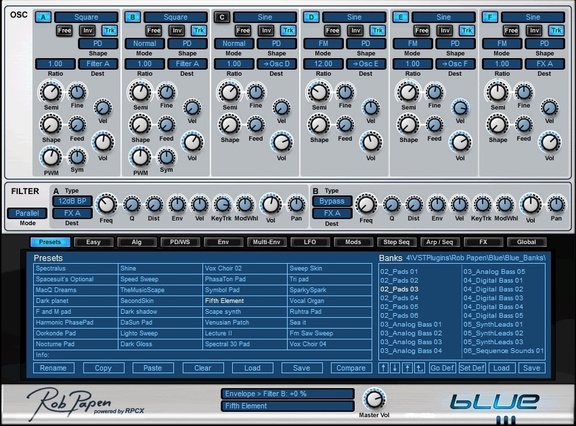 BLUE has six oscillators which can be connected in various ways, two analogue style modelled stereo filters, an enormous range of processing and modulation options, sequencer and an incredibly powerful arpeggiator.

BLUE is an exciting soft synth that delivers FM Synthesis, Phase Distortion Synthesis, Wave Shaping Synthesis, and Subtractive Synthesis in one seriously creative combination!We call it ‘Crossfusion synthesis’… All this is creatively combined under one virtual roof with over 2000 inspirational presets, covering a wide range of musical styles, and much more besides.

As some of you might already be aware, the Rob Papen roadmap is leading to BLUE-II in the not too distant future… Until then, we’re offering BLUE at a discounted price, and, of course, you can still upgrade to BLUE-II once it is released.

BLUE for Windows and Mac (VST/AU/RTAS) is now available to purchase for 79 EUR/$99 USD (previously 149 EUR/$179 USD). Those who purchase BLUE in September 2013 can contact Rob Papen for the free upgrade when BLUE-II is released.