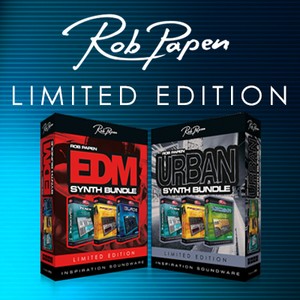 Rob Papen has announced that the availability of the limited-edition EDM and Urban synth bundles has been extended to the end of June, 2013.

These two special bundle packs were created with Urban and Electronic Dance Music producers in mind.

The EDM Synth Bundle and the Urban Synth Bundle each include three Rob Papen synths, saving you around 45% off the combined price, but don’t wait around as there are only limited amounts available worldwide.

Users that already own one or more Rob Papen products can get an upgrade offer at an authorised dealer or directly from robpapen.com.

Note: these bundles also include Predator 1.6.4, the latest version with over 450 new presets. 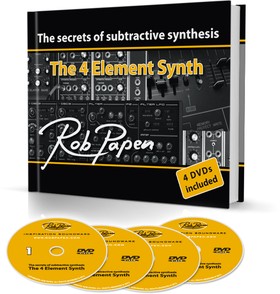 Rob Papen has also announced that his The 4 Element Synth book/DVD set is now available at student pricing for everyone.

After all, anyone who wants to know what all those knobs and sliders on their favourite analogue synth actually do is a student of subtractive synthesis!

Remember that when Rob started to play his first synth at the end of the ’70s he had to learn the hard way… reading (and rereading) the Korg MS-20 manual from cover to cover. Had a well-written book about synthesis existed at that time then it would have helped Rob enormously in his quest for new sounds! Of course, the Korg MS-20 had no presets so Rob had to create sounds from scratch each and every time he wanted to play.

Over time that became easier, but you can benefit from all his blood, sweat, and tears. So sit back, relax, and enjoy this well-written book that’s as easy on the eye as it is to understand, together with more than 10 hours of entertaining and educational DVD material.

As well as watching additional online video content to supplement the book, other good news is that readers can download the demonstrative Predator presets used by Rob on the DVDs.

The book/dvd set is now available to purchase for 55 EUR / $69 USD (available in the US through Sweetwater).