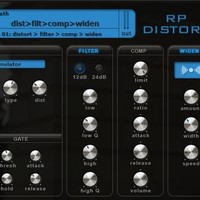 Rob Papen has updated the RP-Distort distortion effect plug-in for Windows and Mac to version 1.0.1.

These units can be re-order, but also can be turned on or off. So in case you only want a great analog modelled filter… RP-Distort can offer this. Or only the unique widener unit which is great for widening a boring mono track.

RP-Distort for Windows and Mac (VST/AU/RTAS/AAX) is available to purchase for 49 EUR inc. VAT.