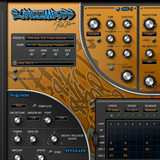 Rob Papen has released version 1.0.3b of SubBoomBass, a virtual synthesizer plug-in for Windows and Mac.

Version 1.3b features some additional presets inside “sequence bank 02” and adding a new “Dirty Flavor” bank.

The new “Dirty Flavor” bank is named after the band of the same name – the producers made a few presets and, inspired by their music, Rob Papen added a few more extra presets in their style of house-music.

Dirty Flavor is a three-man crew hailing from The Hague in the Netherlands. Although the name may not instantly ring a bell, they are not newcomers to the electronic music scene, having already produced many records under several aliases over the past decade. Dirty Flavor’s debut release, ‘Dirty Playroom’, was signed by Toolroom Records and was immediately picked up by Sander Kleineberg, Rene Amesz, Roger Sanchez, Fedde Le Grand, as well as many others.