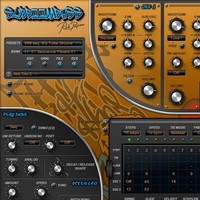 Rob Papen has released version 1.1.2 of SubBoomBass, a software synthesizer for Windows and Mac.

SubBoomBass is filled with excessive amounts of low end ammunition to detonate your tracks! With presets designed by the legendary Rob Papen and other guest artists, this dedicated bass synth will supply you with huge cone-rattling sounds that will devastate any music track. This software instrument is great for Hip Hop and RnB but can also be used for Dubstep, video game music, film scores and more…