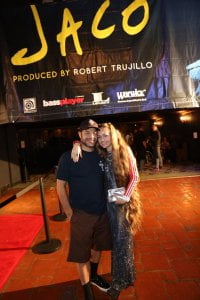 He’s been called the man who gave bass its voice, the bassist’s Jimi Hendrix. Few have impacted the instrument, or music itself, as much as Jaco Pastorius.

“Jaco,” Metallica’s Robert Trujillo’s new biopic on the life and legend of Jaco Pastorius, made its world premiere on Sunday, November 22 with a red carpet screening and concert at the Theatre at Ace Hotel in Downtown Los Angeles. The event was sponsored in part by Ampeg, who also provided a host of backline gear for the all-star band’s jam after the screening.

The highly anticipated film has sold out advance screenings at film festivals worldwide, and has won acclaim from critics and fans alike. Featuring an all-star cast of interviews that includes Joni Mitchell, Sting, Flea, Herbie Hancock, Carlos Santana, Geddy Lee and more, “Jaco” offers a rare look into the life and legend of Jaco, from his scrappy self-taught youth and rise to fame, to his tragic downfall and final days.

Dino Monoxelos, Ampeg Senior Product Specialist, remarked, “Jaco was truly a musical genius, and the immense body of work he created during his short life had an unmistakable impact on not only bassists, but all musicians. Robert’s movie is an awesome tribute to Jaco, and Ampeg is proud to be a part of introducing this film to the public.”

Watch for Robert Trujillo’s upcoming podcast about the film, to be broadcast live from the Green Room at Amoeba Records in Hollywood.