The Roland/BOSS Lifetime Achievement Awards recognize individuals for their invaluable contributions to the music industry while using Roland and/or BOSS gear throughout their careers. Chris Halon, Roland Corporation U.S. Vice President, Marketing, and Leslie Lewis, former Director of The Recording Academy’s P&E Wing, served as masters of ceremony for the gala event, which was attended by artists, musicians and leading journalists from the music industry. 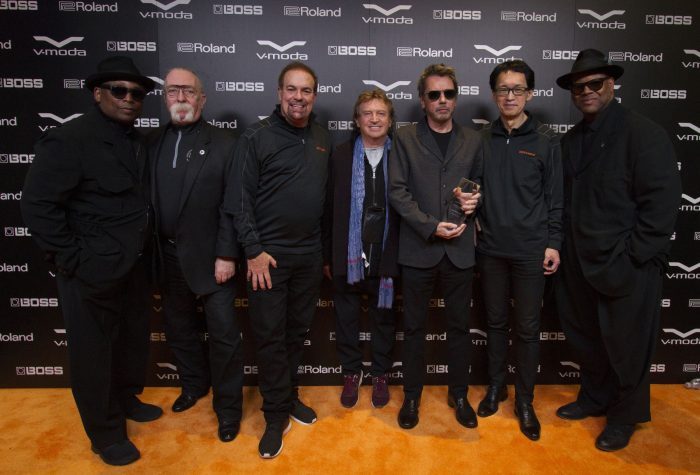 The evening began with Scott Goldman, Vice President of MusiCares; Jay Wanamaker, president and CEO Roland Corporation North America; and Yoshi Ikegami, president of BOSS Corporation, presenting the Roland & BOSS Lifetime Achievement Award to Andy Summers. Rising to fame by the early 1980s as the guitarist with the multi-million record selling rock band The Police, Summers was among the most influential musicians of his generation. The band dominated the music scene and media in the 1980s with several number-one albums and singles. The band was the recipient of countless awards, including several GRAMMY®s. Summers’ innovative guitar playing created a new paradigm for guitarists in this period and has been widely imitated ever since. Since the Police disbanded, Summers has enjoyed a robust solo career and has found further success as a photographer. He has also been inducted into the Rock & Roll Hall of Fame as a member of The Police.

Summers shared, “Musical creativity is sometimes enhanced and encouraged by having these wonderful devices. Over the years, the products that I have used from Roland, in particular, were able to open up what I was able to do. Of course I would have to cite my guitar sound with the Police in particular. ‘Don’t Stand so Close to Me’… ‘Walking on the Moon’… ‘Every Breath You Take’ — all those hits featured Roland products, and if I hadn’t had them, I might not be standing here today. Today, I’m still making records, of course. I believe in the interaction between technology and musical creativity, and one can inform the other. It seems to be particularly important if you play the electric guitar! Roland products have always made this interaction possible. It’s an interesting time, in that technology and music are in partnership to push the creative edge forward, and I think Roland is leading the way in that.”

Next, Mr. Jun-ichi Miki, Roland Corporation CEO and representative director, and Jay Wanamaker, Roland Corporation North America president and CEO, presented Jarre with a Roland lifetime achievement award. As a pioneer in electronic music, Jarre elevated the genre to new peaks of popularity as early as the late 70’s and 80’s and has sold 80 million albums worldwide to date. His dynamic concert experiences broke new ground and paved the way for state-of-the-art outdoor live events in the decades since. Apart from his activities directly linked to musical composition, Jarre has been spokesperson for IFPI (International Federation of Phonographic Industry) and has headed various lobbies for Internet copyright legislation before the European Parliament. Since June 2013 Jarre has served as president of CISAC (International Confederation of Authors and Composers Societies), succeeding the late Robin Gibb. He is also, for the past two decades, UNESCO spokesperson and ambassador, contributing to the awareness of two key UN Millennium projects: “Water for Life” and “Education for All.”

Jarre commented, “I started electronic music before these strange machines were even called synthesizers – back when we were actually considered a bunch of crazy guys working with machines; the whole idea was, for the first time, opening new doors and virgin territories. For the first time, we were able to become our own creators of sound. I wouldn’t be here without Roland synthesizers.”

Jay Wanamaker remarked, “The Roland and BOSS Lifetime Achievement Awards were created to acknowledge true innovators for their contributions to the music industry and thank them for their long association with our brands. We are honoring Jean-Michel Jarre for his body of work and pioneering use of Roland products, and Andy Summers for his era-defining guitar sound, achieved with the help of BOSS pedals. We thank them for their contributions to Roland and to music and the recording arts.”