Roland has announced it is now shipping the R-26 Portable Recorder, a handheld device that provides up to six simultaneous channels of pro-quality audio recording to SD/SDHC media. 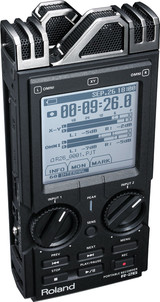 Designed from the ground up for superior sound quality and ease of use, the R-26 is filled with features that will satisfy both pros and hobbyists alike. For the ultimate mobile flexibility, the R-26 can be powered either with the included AC adaptor, four internal AA batteries, or an external battery.

Two stereo mic types — omnidirectional and XY — are integrated into the R-26’s stylish chassis, providing mic options to suit any style of audio recording. In addition, there are two XLR/TRS combo inputs with phantom power for connecting external mics or line-level devices, plus a stereo mini-jack for a plug-in powered mic. The preamps for all mic channels are derived from the hi-res preamps found in Roland’s R-44 commercial field recorder.

Audio from the onboard mics and external inputs can be mixed internally in the R-26 and captured to a single stereo file, or can be recorded as three separate stereo files (six channels total) for mixing together later. Resolutions up to 24-bit/96 kHz are supported, and available file types include WAV and BWF. MP3 is supported as well, and the unit can record both WAV/BWF and MP3 formats simultaneously.

The R-26’s large touch screen provides detailed level metering and convenient fingertip control over most functions, and is equipped with a high-luminance backlight for perfect visibility in any situation. Hardware controls are ergonomically organized and clearly labeled, with large input level knobs for precise adjustments and dedicated buttons for often-used functions. The R-26 also features AUTO-SENS for setting input levels automatically, as well as onboard waveform editing.

USB 2.0 allows for both data transfer and audio interface functionality with Windows and Mac-based computers. Users can connect the R-26 and use its built-in mics and external inputs as a high-quality input device for their favorite audio recording software. Loop-back recording is also supported, allowing multimedia users to combine audio from the R-26’s mics with streaming audio from the PC. The R-26 comes with Cakewalk’s SONAR X1 LE, a professional Windows-based DAW for general audio production in addition to mixing and processing R-26 recordings.

With its rear-panel mount, the R-26 can be easily installed on any standard camera tripod stand, or on a mic stand with an optional adapter. An extensive line of accessories is available to compliment the R-26, including the OP-R26CW Cover/Windscreen and the CS-10EM Binaural Microphones/Earphones to name a few.

The R-26 Portable Recorder is available to purchase for MSRP $599 USD.