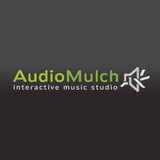 This update resolves a small number of bugs to improve stability on both Mac OS X and Windows platforms. This is anticipated to be the final 2.0.x series release prior to version 2.1.

AudioMulch is available for purchase for Windows and Mac for $189 USD.