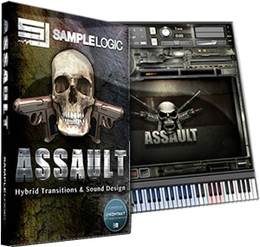 Sample Logic has announced ASSAULT, a massive suite of over 850 bone-crushing instruments and multis that transform sound design into superior cinematic percussive instruments.

From this material, Sample Logic spent numerous hours carefully manipulating and morphing the sounds to forge a sample library that will no doubt be your secret weapon. ASSAULT is geared for film, TV, game composers and sound designers.