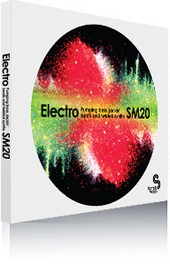 Sample Magic has announced Electro, the 20th sample library in its catalog.

Running the ground between indie-dance and peaktime mainroom filth, Electro takes in the best of techno, Dutch, jackin’ and classic french disco, bending all the rules and mashing every genre along the way.

Weighing in at a hefty 750+MB of 24-bit, 44.1Khz key and tempo-labeled Wavs (1.8GB+ multiformat material), the majority of loops come in industry standard 128bpm, ensuring dancefloor smashes are just a few clicks away.

This pack includes 2 x DVD multipack, ‘Behind The Scenes at Sample Magic’ film, 32 page booklet featuring the tips and tricks of house and electro production PLUS bonus 700MB samples of the finest house and future SM releases. Electro will be shipping early December.