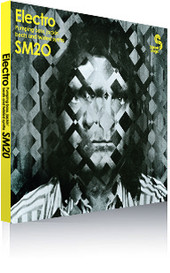 Five years since the acclaimed Funky House Grooves hit the stores we are hugely proud to announce the release of SM20 Electro, featuring 750MB of pumping bass, jackin’ beats and twisted synths.

Running the ground between indie-dance and peaktime mainroom filth, SM20 Electro takes in techno, Dutch, jackin’ and classic French disco, bending all the rules and mashing every genre along the way.

But best of all, to celebrate our 20th release we’ve put together a special package for SM fans. Instead of the DVD multipack we’re offering you the chance to get your hands on an exclusive Limited Edition Collectors Bookpack – featuring 2 stacked DVDs, one bonus CD, bonus booklet and the ‘Behind the Scenes at Sample Magic’ film. Even better, we’re offering it for a best ever price of £54.90.

SM20 Electro is available to purchase as a download for £49.90 GBP. The Limited Edition Collectors Bookpack (free postage worldwide) is £54.90 GBP.